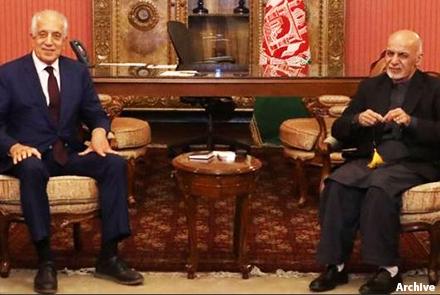 RT – The US envoy leading negotiations with the Taliban met with Afghan President Ashraf Ghani in Kabul on Wednesday, amid a renewed push to reach an accord with the insurgents. US special representative for Afghanistan reconciliation Zalmay Khalilzad and Ghani discussed several topics, including the need for a ceasefire, the president’s spokesman Sediq Seddiqi said.

Khalilzad has spent more than a year leading a push for a deal with the Taliban that would see the US reduce its military footprint in Afghanistan in return for security guarantees from the insurgents.

Iran’s top security official said on Wednesday that Tehran opposed US negotiations with Afghanistan’s Taliban, as the talks excluded the Afghan people and government.

“Any strategy, any decision or plan without the participation of the Afghan people is wrong and doomed to failure,” said Rear Admiral Ali Shamkhani, secretary of Iran’s Supreme National Security Council. “The Taliban are a reality of the Afghan people that cannot be ignored. But are all Afghans Taliban? No,” AFP quoted him as saying.