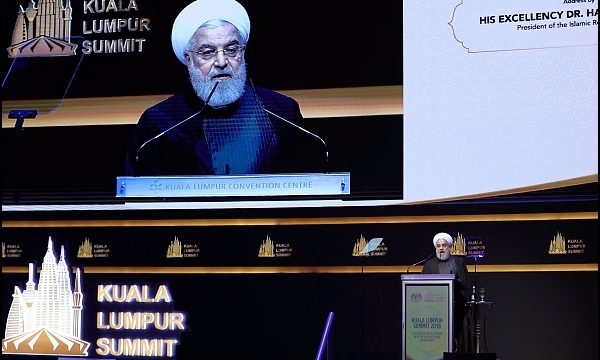 Rouhani calls on Muslim states to end US dollar domination

MNA – Iranian President Hassan Rouhani pointed to the potentials of Islamic countries in different economic fields, noting that measures should be adopted to put an end to the domination of the US dollar.

“The Islamic world should adopt measures to set itself free from the domination of America’s financial system and US dollar,” Rouhani told the Kuala Lumpur summit on Thursday in Malaysia.

He went on to say that Islamic countries complement each other and that signing banking cooperation and creating various financial mechanisms can lead to the mentioned aim.

Economic sanctions have turned into the main tool for imposing domination, he said, adding that the dollar-based financial system of the world has allowed the United States to impose its illegitimate demands on other countries through the ‘threat of sanctions’ and ‘economic terrorism’.

Kuala Lumpur Summit, themed “The Role of Development in Achieving National Security,” has gathered around 450 leaders, scholars, clerics, and thinkers from 52 countries including Iran, Indonesia, Pakistan, Qatar, and Turkey. The meeting aims at finding solutions to problems afflicting the Muslim world.

Here is the full text of President Rouhani’s speech according to his official website:

In the Name of God, The Most Compassionate, the Most Merciful

At the outset, I would like to appreciate the nation and government of Malaysia for their warm hospitality and organising this summit. Also, I would like to appreciate Tun Dr Mahathir Mohamad for presenting this important initiative and creating a valuable model of peaceful cultural diversity as well as taking brave steps for bridging the east and the west of the Muslim world and his foresight in bringing diverse attitudes closer together.

The Muslim world is facing emerging challenges at the national and international levels which have impeded the track of development and progress. The most important such challenges include the following:

The danger of weakening national and Islamic identity, the younger generation distancing from their identity and domination of foreign cultures are the most serious threats to the Muslim world. The western pioneering in the development of new technologies has resulted in their strength in imposing and mainstreaming news, the culture of consumption and western lifestyle. Joint efforts to compensate under-development in information technology, moving towards national and regional communication networks and increasing share of Muslim states in the digital economy constitute the roadmap of our future in combatting these crises.

It is regrettable that the Muslim world, from the far western spot in North Africa to the farthest area in East Asia, is grappling with serious security threats and problems ranging from the continued threats imposed by the Zionist Regime that is killing our brothers and sisters in Palestine on a daily basis to the military, political, and economic threats by the United States against some Muslim countries, to the menace of terrorism and mental and behavioural radicalism in some Muslim societies which has paved the ground for foreign intervention. The war in Syria, Yemen, and riots and turbulences in Iraq, Libya and Afghanistan is the outcome of the combination of domestic extremism and foreign intervention.

Maladies such as weakening governance, poverty, unemployment, corruption, and increasing and eroding violence and extremism have endangered national sovereignty in some parts of the Muslim world. Issues such as the globalisation of economy and society, emergence of new discourse in the area of democracy and human rights, growing attention to semantic and software power, rising access to information and progressing growth of non-state actors have added to the dimensions of this challenge. Idealistic, but realistic, policy making in the area of development is now an inevitable necessity.

Economic sanctions are being employed as tools for domineering, hegemony and bullying. The interconnectedness of international economic, commercial and financial systems with the American economic regime and dollarization of national and global economies have provided the US with the possibility of advancing its hegemony under the threat of sanctions and economic terrorism and imposing its illegitimate demands on the other nations. The Muslim world should be designing measures to save it from the domination of US dollar and the American financial regime. The fact of the matter is that Muslim states are complementary to each other in economic terms and therefore, the creation of special mechanisms for banking and financial cooperation among Muslim nations, the use of national money in mutual trade, conclusion of preferential trade agreements among the Muslim countries as well as investment in sectors with relative advantage and similar ideas should be thoroughly investigated by the economists and experts of Muslim states.

If we return to our national and Islamic capacity and rely on our own domestic power and strength, we would be able to convert all the above-mentioned challenges to an opportunity of growth and promotion. I consider the following capacities as the main components of power in the Muslim world:

When I talk about hope towards confronting the challenges and problems of the Muslim world, I mean to present the success story of the Islamic Republic of Iran. My country for the past four decades has been facing all sorts of threats and conspiracies, but it has managed to overcome successfully any threat or challenge and has gained more strength and experience in a manner that we are now recognised in the world as a model of resilience and steadfastness. Since its Islamic Revolution, Iran has overcome three main powerful waves of threats:

Our reliance on Almighty God, enjoyment of Islamic principles and values, contribution of people, development of domestic capabilities and ultimately attention to science and technology are the key to success of the Islamic Republic of Iran. I firmly believe that such a success story and model could be transferred to the Muslim world.

Numerous crises in the Middle East, especially in Yemen, Afghanistan, Syria, and Libya are clear examples of irresponsible and divisive policies. In order to resolve the internal problems of the Muslim world, we believe we need to provide necessary grounds for dialogue and engagement through tolerance of various Islamic schools of though and respect to national sovereignty of all the countries. I personally for my own share presented two initiatives titled the World Against Violence and Extremism and also the Hormuz Peace Endeavour to the General Assembly of the United Nations in order to highlight the significance of dialogue and engagement; domestic dialogue and engagement with neighbours as well as regional countries.

Insisting on peace and friendship and prohibition of hostility and animosity are sings of our firm belief on the sublime teachings of Islam as we consider their realization as a divine promise by the Almighty God.

For an auspicious beginning, I should like to mention some of the plans which could make us closer to realizing such goals:

In conclusion, once again I would like to appreciate the warm and cordial hospitality of the government and nation of Malaysia especially His Excellency Tun Dr. Mahathir Mohamad.