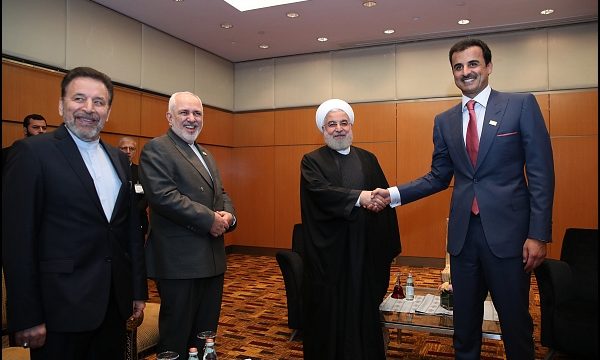 FNA – Iranian President Hassan Rouhani and Qatari Emir Sheikh Tamim bin Hamad Al Thani in a meeting on the sidelines of the Kuala Lumpur Summit on Thursday conferred on avenues for the further development of relations and cooperation and overcome sanctions against their countries.

During the meeting, President Rouhani referred to the growing Tehran-Doha ties, and censured the blockade imposed by the Saudi regime and three of its allies on Qatar in 2017.

“We were and are standing alongside Qatar and condemn any pressure and obstruction targeting this country,” he said.

Rouhani also said that the two countries could use their close ties as an opportunity to boost their cooperation in the areas of economy and trade.

The Qatari emir, for his part, hailed his country’s relations with Iran as special, adding that the two sides should increase bilateral contacts and interactions given the current circumstances of the region.

He also appreciated Iran’s support for Qatar in the face of economic embargos, saying Doha would not forget Tehran’s position.

Elsewhere in his remarks, Emir of Qatar emphasized, that “we believe that the two countries of Iran and Qatar can overcome sanctions imposed on them successfully”.

Iranian President Hassan Rouhani traveled to Malaysia on Dec. 17 at the head of a high-ranking political delegations for attending attend a conference for leaders of the Islamic countries at the official invitation of Malaysian Prime Minister Mahathir Mohamad. President Rouhani is scheduled to leave Malaysia for Japan on Dec. 20 and meet with Japanese Prime Minister Shinzo Abe for broadening bilateral ties between Tehran and Tokyo.