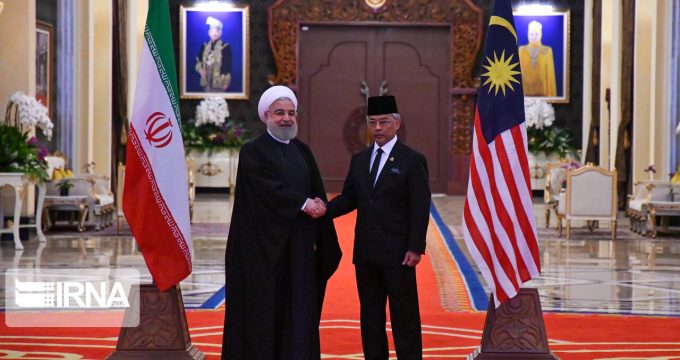 Tasnim – Iranian President Hassan Rouhani called for special attention to the issue of Palestine in the KL Summit 2019, attended by the leaders of major Muslim nations.

In a meeting with Malaysia’s constitutional monarch and head of state, Abdullah of Pahang, held in Kuala Lumpur on Wednesday, President Rouhani described Palestine as a chronic wound in the body of the Islamic world.

“This issue must be seriously taken into account at the Kuala Lumpur Summit,” the Iranian president said.

Pointing to the displacement of Palestinian people over the past 70 years, Rouhani said the resolution of problems requires Muslim cooperation and unity.

He also hailed the Malaysian prime minister’s “timely” move to hold the KL Summit, saying the three primary concerns in the Islamic world are the issue of Palestine, the big powers’ interference in the internal affairs of Muslims, and the need for scientific and economic development.

For his part, the Malaysian king thanked President Rouhani for taking part in the KL Summit, saying Iran’s presence has raised the level of the meeting.

Abdullah of Pahang and President Rouhani also discussed the bilateral relations between Iran and Malaysia, with both calling for closer economic, cultural and popular ties.

The Iranian president is in Malaysia to attend the Kuala Lumpur Summit 2019, attended by around 250 leaders, politicians, and thinkers from 52 countries.

After attending the KL Summit, Rouhani will pay a visit to Japan at the invitation of Japanese Prime Minister Abe Shinzo.