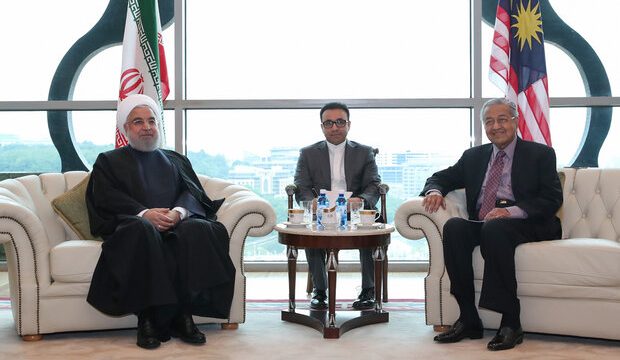 IRNA – A Foreign Policy Analyst Pir Mohammad Mollazehi said on Tuesday that the recent visit made by President Rouhani’s to Malaysia should be regarded as a milestone in Tehran- Kuala Lumpur relations, saying that the trip could bring the two countries’ relations on a brighter path.

In an interview with IRNA on Tuesday, Pir Mohammad Mollazehi referred to the President’s visit to Malaysia and stated that since Mahathir Mohammed took over the affairs of Malaysia, given his interest in developing relations with Islamic countries, Tehran and Kuala Lumpur expanded their ties, and we saw Iran and Malaysia begin close cooperation in various fields.

He said that Mahatir Muhammad’s approach made Malaysia from an ill-progressed country into an advanced economic power, stating that Mahathir Mohammed’s view is based on the idea that Islamic countries should work together and develop in harmony with the situation to leave behind the poverty and dependency because they have enormous resources of wealth, but are caught in selling crude or dependence.

Although Mahathir Mohammed was not in power for many years but he never failed to try to reduce the tensions in the Islamic world, the expert noted.

In Mahathir Mohammad’s view, Iran has all the essential elements and requirements to become a regional and global power and can play a role as one of the leaders of Islam, he said. According to Mahathir Mohammad, good political and economic cooperation with Iran can be achieved.

He added that Hassan Rouhani’s visit to Malaysia is a turning point in broadening relations between Tehran and Kuala Lumpur and noted that the agreements to be reached on this trip could lead to a clearer relationship between the two countries.

Mollazehi went on to say that Mahathir Mohammed views issued based on national and realistic interests rather than ideologically, and according to this view, Malaysia has now become an industrialized country exporting consumer goods, tourism poles and electronic products.

Unfortunately, despite its capabilities, Iran has not been able to use those capacities to develop relations with Malaysia, said Mollazehi. One reason for this is that Iranian businessmen look more to the west than to the east.