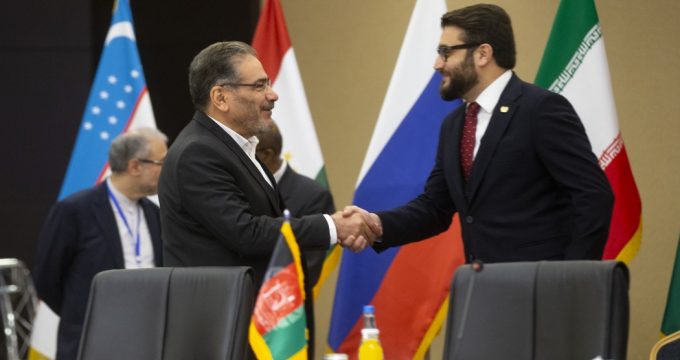 Iran warns of attempts to deploy ISIL terrorists in Afghanistan

Shamkhani made the remarks in Tehran in a meeting with Afghan National Security Advisor Hamdullah Muhib on Wednesday on the sidelines of the 2nd Session of the Regional Security Dialogue with a Focus on Afghanistan.

“Any efforts against Afghanistan’s legal government are aimed at strengthening terrorist groups and serves the US illegitimate objectives,” he added.

Shamkhani mentioned that breaking national unity in Afghanistan against terrorism and extremism is one of the enemies’ evil strategies to harm the country’s security, adding that Iran’s priority is to develop good and friendly ties with the neighboring countries, specially Afghanistan.

Muhib, for his part, praised Iran’s efforts to bring peace and security in Afghanistan, adding that the recent conference on regional security is one of the instances of Tehran’s sincerity.

In relevant remarks on Tuesday, Shamkhani said the US and Israel’s regional policy entails reinforcing the ISIL terrorist group in line with spreading Islamophobia as well as conflict, war, and crisis in the Muslim countries.

“Promoting the ISIL version of Islam is one of the goals of the US and the Zionist regime to spread hatred towards Islam and create conflict, war, and crisis in the Islamic World,” Shamkhani said in a meeting with his Tajik counterpart Mohammadali Vatanzadeh on the sidelines of the 2nd Session of the Regional Security Dialogue with a Focus on Afghanistan.

The second session of Regional Security Dialogue with a focus on Afghanistan was held in Tehran with the participation of high-ranking security officials from Iran, Russia, China, India, Afghanistan, Tajikistan, and Uzbekistan.

The one-day session was held at the initiative of the host the Secretariat of the Supreme National Security Council of the Islamic Republic of Iran, with a focus on Afghanistan and a comprehensive fight against various forms of terrorism in that country.