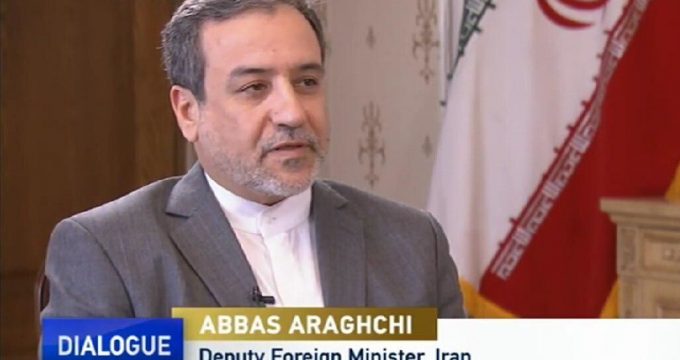 Araghchi: Tehran not ready to talk with Washington at any level

IRNA – Iran’s Deputy Foreign Minister Abbas Araghchi once again rejected the possibility of holding talks with the US at any level and said the US withdrawal from Iran’s nuclear deal known as the Joint Comprehensive Plan of Action (JCPOA) has changed the experience of holding negotiations with Washington to a bad one.

Speaking to Chinese media “CGTN”, Araghchi said: “Since US withdrawal from the JCPOA has changed negotiations to a bad experience, Tehran is not ready for talks with them at any level. Iran wouldn’t bow to pressure. Negotiations under maximum pressure is tantamount to surrender,” Araghchi believes.

“So, for the Iranian government, at this moment, negotiation with the United States would be out of equality,” he added.

He noted: “We are not counting on who is the U.S. president and who is not. We have a very basic principle and strategy. And we are following it very carefully.”

“We don’t think the change of president in the United States would change anything in the relation with Iran, unless somebody come who can fulfill the commitments they have already made and come back to the JCPOA.”

“So, we can, again, talk with them in the context of Arbitral Joint Commission of the JCPOA. That is the only possibility.”

In response to a question on the message Iran is trying to send as it resumes uranium enrichment with reduced commitments to the deal, Araghchi said: “The message is that we want to save the deal. The purpose is not to kill the deal.”

“Otherwise, we could have withdrawn from the deal right after the U.S. withdrew on May 8, 2018, and nobody would have blamed us because that was in reaction to what the U.S. had done,” he added.

“No deal can survive if there is not a balance between gives and takes. And we have no balance in the deal right now.”

“Iran is fully committed to its obligations up to May this year. But we received nothing. So, what Iran is doing is still trying to restore the balance in the deal, which hasn’t happen yet.”

“We have a very good experience of working with China for coming to a conclusion on Iran’s nuclear program. China was a party to the JCPOA and still an important partner to Iran. “