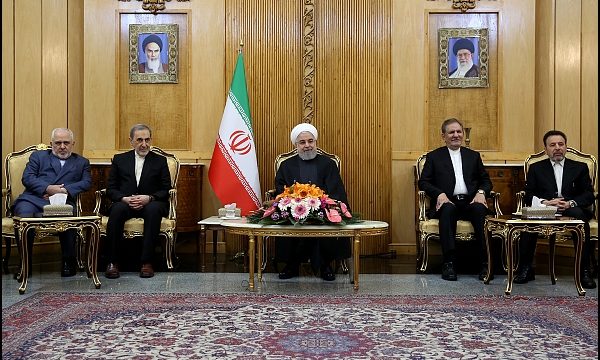 Press TV – President Hassan Rouhani says the United States’ “cruel and unlawful” sanctions against Iran will not be sustainable, and that all countries are want to foster close and friendly relations with the Islamic Republic.

“The conditions caused by the cruel pressure and illegal US sanctions will not be sustainable. All countries want to have close relations with Iran, especially the ones with whom we have traditionally enjoyed good relations,” Rouhani said on Tuesday.

The Iranian president made the remarks before departing Tehran for the Malaysian capital to attend the Kuala Lumpur Summit, which is set to take place from December 18 to 21.

The event, themed “The Role of Development in Achieving National Security,” will gather around 450 leaders, scholars, clerics, and thinkers from 52 countries including Iran, Indonesia, Pakistan, Qatar, and Turkey.

Fifty-two countries have confirmed their participation in the event, which will seek solutions to problems afflicting the Muslim world.

“The Muslim world has vast potential when it comes to geography, energy, population, industry and culture, but it is unfortunately grappling with problems such as armed conflicts and terrorism” in addition to foreign intervention, Rouhani said.

He said Iran and Malaysia share “common views” regarding the developments in the region and the Muslim world, describing diplomacy as the sole way to resolve the issues.

Rouhani said he would highlight Iran’s peace initiative for the Persian Gulf region at the Kuala Lumpur meeting.

He initially introduced the Hormuz Peace Endeavor (HOPE) in September at a meeting of the UN General Assembly.

President Rouhani also said he would hold multilateral meetings with senior Malaysian officials as well as leaders from different participating countries on the sidelines of the event.

Wrapping up his three-day stay in Malaysia, Rouhani will then head to Tokyo for a visit upon an official invitation by Japanese Prime Minister Shinzo Abe.

On visit to Japan

Regarding his upcoming visit to Japan, Rouhani said he would discuss mutual Tehran-Tokyo ties as well issues related to regional security during his meeting with Abe.

Hailing economic ties between Iran and Japan, Rouhani said Japanese companies made sizeable economic investment in Iran following the 1979 Islamic Revolution and “currently, we are in close talks on environmental issues.”

He said the current decline in Iran-Japan relations is temporary and a by-product of Washington’s “illegal and cruel” sanctions.

Rouhani will be the first Iranian president to visit the Asian country since 2000. The visit comes amid heightened tensions between Iran and the US.

Back in June, Abe traveled to Iran on a first visit by a Japanese premier in more than 40 years.

Abe said in his meetings with Iranian officials that Japan sought to play a maximum role in preventing tensions.