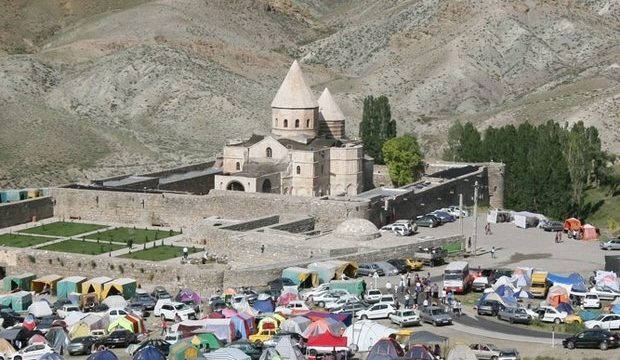 Iran to build campsite near Armenian Monastery of Saint Thaddeus

Public Radio of Armenia – A travelers’ campsite is to be established adjacent to the Armenian Monastery of Saint Thaddeus, northwestern Iran, in order to bring comfort to the visitors of the UNESCO-registered place of worship, Tehran Times reports.

“The scheme is aimed at providing recreational and amusement facilities to domestic and foreign tourists visiting the World Heritage,” Chaldoran Governor Hassan Mohammadzadeh said, adding that construction operations will be commenced in March 2020.

Each summer, hundreds of Christian worshippers and pilgrims from Iran, Armenia, Syria, Lebanon, the Netherlands, France, Austria, Germany, Canada, and some other countries come together at St. Thaddeus to observe a religious ceremony, which is passed down from generation to generation.

The festivity is of high importance for Iranian-Armenians who mostly come from the cities of Tabriz, Urmia, Tehran, Isfahan, and Qazvin, to stage the reunion in groups and families. It also provides them the opportunity to go on holiday and visit distant relatives.

Also known as the Qareh Klise (“the Black Church”), the church is one of the oldest surviving Christian monuments in the country.

The ancient Church shows off elaborate bas-reliefs of flowers, animals and human figures on its façade and exterior walls. It bears verses of Old and New Testament in Armenian calligraphy as well.

Together with St. Stepanos Monastery and the Chapel of Dzordzor, Qareh Klise was placed on the UNESCO World Heritage list in 2008 under the name “Armenian Monastic Ensembles of Iran.”

UNESCO says that the churches bear examples of the outstanding universal value of the Armenian architectural and decorative traditions.