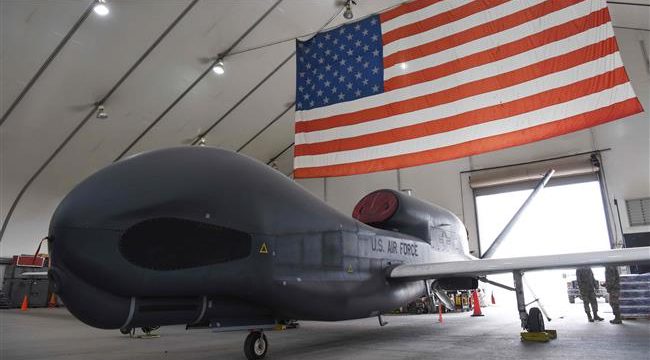 Iran downing of drone spelled disaster for US Navy: Report

Press TV – Iran’s downing of an intruding US drone earlier this year, coupled with two crashes of the same aircraft, has seriously impacted Washington’s military capabilities, with the Navy left with only two more of the massive, costly unmanned vehicle.

One of the US Navy’s most advanced spy drones recently suffered a crash in the Middle East, a statement published by the US Naval Institute’s news outlet said.

An RQ-4A Broad Area Maritime Surveillance Demonstrator (BAMS-D) “struck foreign object debris (FOD) during takeoff while supporting operations in the US Fifth Fleet area of responsibility” on November 26 which left it grounded, the Navy said.

The drone model, also known as the Global Hawk, is estimated to cost some $180 million and was previously involved in a 2012 crash during a training flight in Maryland. CNN reported at the time that the US Navy had acquired five of the aircraft.

And in June of this year, a Global Hawk was shot down by Iran in a dramatic surface-to-air missile strike over the Strait of Hormuz.

The United States Naval Institute estimated that the attack, coupled with the latest loss, leaves the Navy with only two more of its original fleet of five drones.

Leading US magazine Foreign Policy cited current and former US military officials as saying last month—prior to the latest incident—that the US Air Force was looking to retire 21 of its own 35 RQ-4 Global Hawks.

The reported move came amid the growing capabilities of competitors like Russia and China, as well as increasingly powerful tools being developed by other powers like Iran, Newsweek magazine said.

The Iranian Army took down the Global Hawk by its indigenous Khordad 3 air defense system after it had breached the country’s airspace on a spying mission and unheeded numerous warnings.

US President Donald Trump went out of his way to thank Iran for the “wise” decision not to shoot down an American military plane with a crew of 38 aboard. Trump said Iran had a manned plane “in their sights” but instead hit the remotely-piloted surveillance plane, “and that’s something we really appreciate.”

Last  month, the Islamic Republic held a massive air defense exercise last month covering an area roughly the size of the US state of California. Codenamed Guardians of Velayat Sky-98, the drills were carried out in the central province of Semnan.

The drills, which a senior Iranian military official touted as utilizing “world-class” and “cutting-edge” anti-aircraft systems, were held just as aircraft carrier USS Abraham Lincoln sailed through the same Strait of Hormuz where the Pentagon drone was downed over the summer.

Iranian Army Air Defense Brigadier General Alireza Sabahifard said his forces would “practice the toughest and most realistic combat conditions” and that the war games would take place especially in the Strait of Hormuz.

He added: “I advise enemies not to put us to the test, because conducting such a test and entering the sky of the Islamic Republic of Iran, as shown in the past, will lead to no achievements for them, except humiliation.”

The critical waterway is considered the world’s most important maritime oil chokepoint and has been a flashpoint for worsening tensions after Washington’s deployment of additional forces and military assets to the waters.

The Global Hawk shot down by Iran can remain in flight for up to 30 hours, potentially covering around 9,000 miles, hitting 65,000 feet in height.

Former Pentagon chief Jim Mattis said Friday that Iran should be met with “some sort of retaliation” for taking the US aircraft out of the sky, but then bit the bullet and agreed that it was a dangerous decision to make.

“Once you enter into this, you’re entering into a fundamental unpredictable phenomenon. It is war, or a war like act,” he said.

Following the shooting down of a US drone in 2011, Mattis, then head of US Central Command, allegedly wanted a strong, direct response to the Iranian military.

“I proposed to Washington that we launch another drone on the same track, position a few F-18 aircraft out of sight, and shoot down the Iranian aircraft if it attacked the drone,” he wrote in his new book “Call Sign Chaos.”

Mattis was ultimately relieved from that post in part because of his aggressive stance towards Iran, in contrast with Obama administration policies.