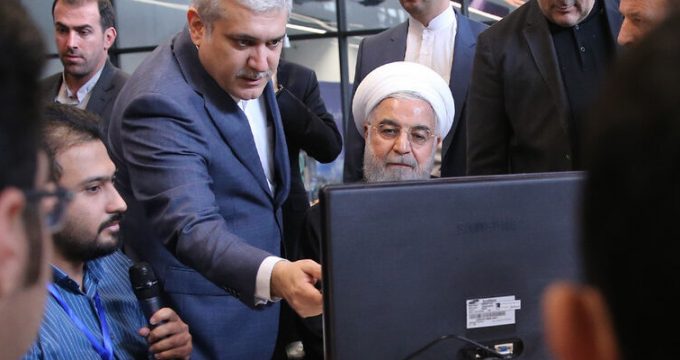 Bourse and Bazaar | Khosro Kalbasi: About twenty years ago, when Milad Nouri first told his parents and university instructors that he wanted to be a programmer, they thought he was another good-for-nothing youth.

Today, Nouri is one of the veteran programmers who have helped lead Iran’s digital revolution, contributing to the launch of companies whose apps and online services are used by millions of Iranians daily, greatly contributing to country’s economy.

Nouri and his fellow programmers had to persistently battle a suspicious state and a dismissive public. Over the years, many left the fight and sought new opportunities abroad, while others remained in Iran and paved the way for the emergence of a genuine startup ecosystem—at last Iran’s has entered its digital age. But a recent nationwide internet shutdown has hit morale in the programmer community like nothing before.

On November 15 an unexpected decision to hike fuel prices threefold led to widespread protests. As part of their crackdown, the following day, Iranian authorities decided to hit a kill switch and—in an unprecedented move—cut off the nation from the World Wide Web.

The internet blackout, which lasted for nearly a week, has cast a dark shadow over Iranian online businesses and the programmer community. Many programmers are once again debating whether they should stay and fight for internet freedom in Iran, or pull up stakes and move abroad. Nouri and his peers are facing a new test of their resilience and resolve.

Reflecting on the early years of his career as a programmer, Nouri recalls the beeps and screeches of the dial-up modems and that used to connect him to the internet. “I used to go online as soon as my parents went to bed,” Nouri explains, as his parents did not appreciate that the phone line was busy when he was online.

“The funny thing is that this habit got me into trouble too,” Nouri tells me. His parents, like many others, were worried about the sleepless hours he was spending behind the glare of his computer screen.

Computers were still alien technology in those years. State-run broadcasters did little to familiarize people with the nascent digital world. On the contrary, state television sowed seeds of distrust. Numerous “documentaries” were broadcast that called on parents to be vigilant because the internet would surely “corrupt the youth.” Nouri remembers these programs. “Whenever such shows came on TV, my parents and relatives would give me worried looks,” he says.

During Khatami’s tenure, the country’s technological infrastructure was extremely underdeveloped. The internet penetration rate and average connection speeds were low. Nouri tells me that for a long time, when friends and family asked him what he did for a living, he would lie: “I would just say, ‘I am a university student.’ Most people didn’t know what programming was. And even if they did, they wouldn’t acknowledge it as a job. To be honest, no one made money out of this line of work, so they weren’t really wrong either.”

In the late 2000s, some Iranian businesses started to invest in online advertising, but it was not until the arrival of smartphones that big money first entered the startup ecosystem.

Given political tensions during Ahmadinejad’s two terms—especially in 2009—curbs were imposed on internet access, hampering the growth of Iranian online services and, by extension, the newfound fortunes of local programmers.

But once tensions eased and more investment was directed towards digital innovation, programmers saw their incomes and social status rise again. When President Rouhani was elected for his first time in 2013, he and his administration jumped on the “digital economy” bandwagon and promoted support for such businesses as part of wider reforms to curb Iran’s overreliance on the oil industry.

Following this shift in policy, Iranian startups found room to grow. Careers in computer programming became a trendy and talented programmers were aggressively sought by employers. The same state-run TV channels that once demonized technology were broadcasting programs to teach people about computer science. As ventures grew, Iranian programmers found themselves handsomely paid. Parents began to encourage their children to study computer science at university.

In many ways these changes were inevitable. The spread of cheap smartphones and 3G networks brought millions of Iranians online. For businesses, digital services became a crucial way to reach customers. While Iran’s tech entrepreneurs acknowledge that Rouhani and his administration officials, and in particular the current ICT minister Mohammad Javad Azari Jahromi, have supported the transformations, they believe that the changes were largely inevitable.

In the last fiscal year, the nominal value of Iran’s e-commerce market grew 30.5 percent and reached IRR 2.08 quadrillion ($18.4 billion), according to data published by the E-Commerce Development Center of Iran. This impressive growth has seen the senior executives of digital ventures elevated as exemplars of Iran’s dynamic economy. But as executives and investors today enjoy access to senior officials, even sitting down the president for “friendly chats,” the pioneering programmers have been somewhat forgotten.

The first batch of successful Iranian startups were established by programmers who had both the technical knowledge and the vision necessary to create entirely new business models. But as the Iranian startup ecosystem has matured, tech companies have increasingly hired new managers who do not have a programming background. Coders were forced to take a back seat. “Nowadays, we are just seen as people who turn caffeine into code,” Nouri says.

The programming community has reacted by holding onto their irreverent spirit. Like their peers around the world, Iranian programmers revel in the stereotype of coffee-drinking, introverted nerds always hunched behind their laptops.

The subculture manifests itself on social media, especially on occasions like International Programmers’ Day when Iranian coders trade stories on Twitter and Instagram, or when Iranian social media users joke that it is now cooler in Iran to have a programmer as a boyfriend than a footballer.

The world’s most powerful nerds—Bill Gates, Mark Zuckerberg, and the late Steve Jobs—are revered by Iranian programmers as leaders to emulate, their triumphs known through books like Walter Isaacson’s biography Steve Jobs and movies like The Social Network.

For this reason, some Iranian politicians rail against programmer subculture as too Westernized and too progressive. While it is true that those involved in the digital economy tend to be more socially progressive, the subculture also remains male-dominated. Numerous cases of misogyny and harassment make clear that a lot of Silicon Valley’s most regressive features are also found in the Iranian ecosystem.

After the United States withdrew from the Iran nuclear deal and reimposed harsh secondary sanctions, the Iranian economy entered a period of crisis. Many businesses, including tech firms, can hardly make ends meet. The depreciation of the rial over the past two years has also hurt the purchasing power of ordinary people—programmers, like many other Iranians, are increasingly considering emigration, knowing that their skills are in demand abroad. Industry insiders say about 1 in every 5 programmers wants to emigrate.

At the Dayhim Innovation Factory in southeast Tehran, 60 young programmers were hunched behind laptops. They had gathered from across Iran for a coding boot camp held in the once-deserted industrial plant, which had been recently transformed into an innovation hub. During a short break between their classes, the students talked about their dreams and aspirations, asking that only their first names be used.

Wearing a black Linkin Park t-shirt, 20-year-old Sina, relayed his dream to leave Iran. “I grew up listening to Western music, watching Hollywood movie. Life is more fun in the west. Or that’s how it looks,” he laughs, adding, “I want to experience that fun life first hand.”

Sina was honing his programming skills to boost his chances of starting a new life abroad. Many of the young men, all of them between 16 and 24, had similar aspirations.

The internet blackout has shaken the resolve of even the most committed of Iran’s programmers. A prominent programmer known simply as Jadi, who has blogged about the internet in Iran since 2006, captured the sentiment in a widely shared tweet: “The number of people who have left [Iran] in the last two years is shocking… [So is] the number of people that are trying to find a way to leave now… And there is no way to argue, ‘Just stay.’”

But 20-year-old Esmaeil from Esfahan thinks he will stay. In his view, “Iran’s fast-growing tech market provides programmers with a golden opportunity.” Esmaeil believes that given low competition in the sector and growing investment from domestic backers, programmers can continue to make easy money in Iran.

A contrarian streak might be the only thing that can save Iran’s programmer community.