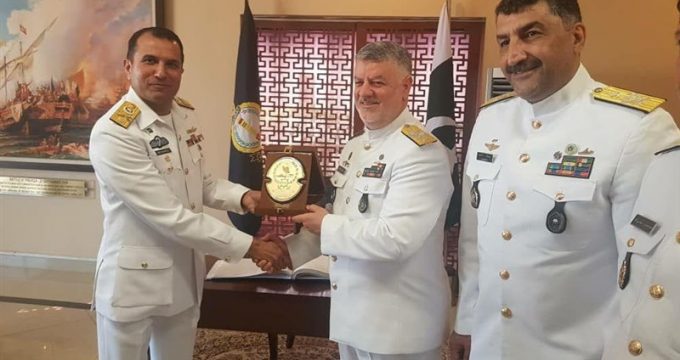 Tasnim – Commander of the Iranian Navy Rear Admiral Hossein Khanzadi paid visits to several training and research centers of the Pakistan Navy in the southern port city of Karachi.

On the second day of his visit to Pakistan, Rear Admiral Khanzadi and his accompanying delegation visited the PNS Qasim, a major marines base, a shipyard and several naval training and research centers in Karachi.

Speaking on the sidelines of the visits, Khanzadi said training is the best and most effective component of learning and enhancing experience in peacetime.

“During these training interactions and ties (between the navies of Iran and Pakistan), all the capacities and capabilities of the two navies can be shared in all areas…,” he added.

Khanzadi pointed to Iran’s presidency of the Indian Ocean Naval Symposium (IONS), saying Pakistan has played a constructive role in collective cooperation among the IONS members.

He added that Iran is looking forward to the Pakistani Navy’s participation in a joint maritime security exercise.

Expressing Iran’s readiness to send warships to the ports of Pakistan for friendly visits, Khanzadi said the two nations have great potential for growth in the shipping industry with their strategic ports, such as the Gwadar Port and Chabahar.

The Iranian commander also warned against hostile attempts to create division among regional nations, stressing that the region would be much safer without the presence of foreign forces.

For his part, the Pakistani admiral highlighted the cultural and religious commonalities between the two neighbors, saying that a maritime corridor that links China to Pakistan provides a perfect economic opportunity for the region and for Iran’s ports.

Iranian and Pakistani naval forces have in recent years promoted cooperation and staged several joint drills in the Indian Ocean and the Sea of Oman.