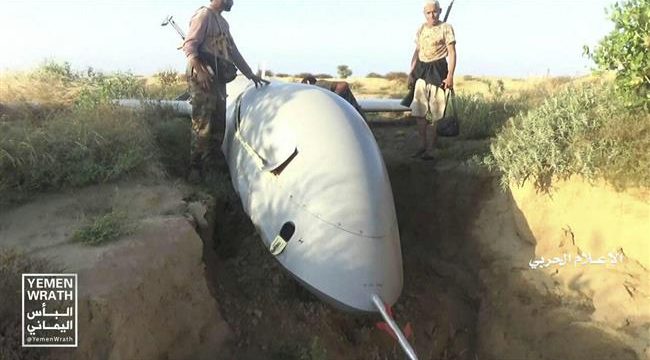 Press TV – Yemeni army forces, supported by allied fighters from the Popular Committees, have intercepted and targeted an unmanned aerial vehicle belonging to the Saudi-led military coalition while flying in the skies over Saudi Arabia’s southwestern border region of Najran.

An unnamed source in the Yemeni air defense forces told the media bureau of the Houthi Ansarullah movement that Yemeni forces and their allies shot down the drone as it was on a reconnaissance mission over al-Kasarah area of the region, situated 844 kilometers (524 miles) south of the capital Riyadh, on Tuesday afternoon.

On Saturday evening, Yemeni soldiers and allied fighters from Popular Committees shot down a Saudi-led drone as it was flying in the skies east of Jabal al-Alam mountainous area in Saudi Arabia’s southern border region of Jizan.

Ansarollah said at the time that the unmanned aerial vehicle was targeted with a proper missile as it was conducting “hostile acts” in the area.

Yemeni air defense forces and fighters from Popular Committees had shot down a Saudi-led drone as it was on a reconnaissance mission over Jahfan district of Jizan, situated 966 kilometers south of the capital Riyadh, two days earlier.

The spokesman for Yemeni Armed Forces, Brigadier General Yahya Saree, wrote in posts published on his Twitter page on December 4 that Yemeni forces and their allies had shot down a drone over Jizan, and another over Asir region.

He added that Yemeni army forces and Popular Committees fighters targeted the unmanned aerial vehicles with proper missiles as they were carrying out “reconnaissance and hostile acts.”

Yemeni army forces and fighters from Popular Committees shot down a spy drone of the Saudi-led military coalition in the skies over Hayran district in Yemen’s northwestern province of Hajjah on December 1.

Saudi Arabia and a number of its regional allies launched a devastating campaign against Yemen in March 2015, with the goal of bringing the government of former president Abd Rabbuh Mansur Hadi back to power and crushing the Ansarullah movement.

The US-based Armed Conflict Location and Event Data Project (ACLED), a nonprofit conflict-research organization, estimates that the war has claimed more than 100,000 lives over the past four and a half years.

The war has also taken a heavy toll on the country’s infrastructure, destroying hospitals, schools, and factories. The UN says over 24 million Yemenis are in dire need of humanitarian aid, including 10 million suffering from extreme levels of hunger.