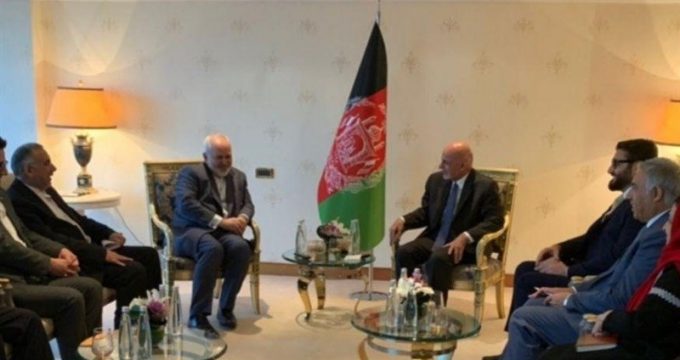 Tasnim – Iranian Foreign Minister Mohammad Javad Zarif and Afghanistan’s President Ashraf Ghani exchanged views on a range of issues, including the latest efforts to move the peace process forward in the war-stricken country.

Zarif and Ghani held the meeting on the sidelines of the Ministerial Conference of Heart of Asia Countries in the Turkish city of Istanbul on Monday.

Bilateral relations between Tehran and Kabul and current political developments in Afghanistan, especially peace talks between Afghan groups, were the main topics discussed at the meeting.

Addressing the conference, Zarif had voiced Tehran’s support for “an Afghan-owned and Afghan-led peace process” and said the withdrawal of foreign troops from the war-hit country would prepare the ground for peace and reconciliation process.

“Announcement of a timetable for a responsible exit of foreign troops from Afghanistan would prepare the necessary ground for the Afghan government to promote peace and reconciliation process at the national level,” the top diplomat stated.

“In that regard, we support an Afghan-owned and Afghan-led peace process with the participation of all political groups and factions including the Taliban with the Afghan government in the center,” he added.