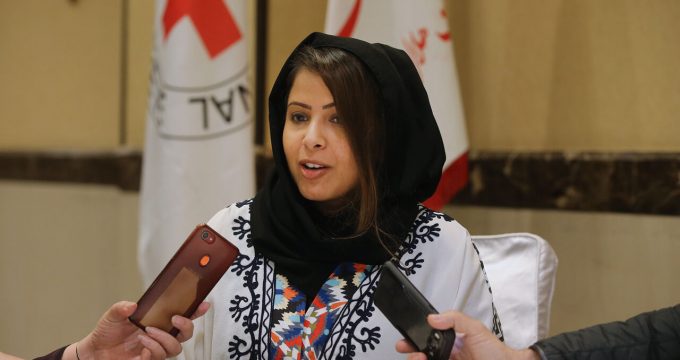 IRNA – The spokesperson of the International Committee of Red Cross (ICRC) told IRNA that the ICRC is satisfied with humanitarian activities of the Iranian Red Crescent Society.

Regional spokesperson and Media Relations Officer for the Near and Middle East Sarah Al Zawqari told IRNA on Sunday that due to the fact that Iran is not an area of conflict, the ICRC’s activities in the country may be “a little bit limited.”

Al Zawqari is currently on a visit to Tehran to participate in the ICRC/IRCS joint workshop entitled “The Red Cross and Red Crescent Movement and Principles of the International Humanitarian Law.”

“But, we extend our areas of the humanitarian operation to other things as well, for example, we cooperate on the issues of Afghan migrants that are in Mashhad.”

Al Zawqari said that the ICRC workers do “whatever they can do to support the Iranian Red Crescent Society, including cooperation in the recent floods, training, repatriation of human remains of Iranian soldiers and those Missing in Action (MIAS) from the 1980-1988 Iraqi battlefield, and financial support.

She said that they do it because “people don’t forget their missing father, their missing son; they will not rest until they know something happened.”

She said that her area covers a large amount of countries that are very much affected by wars and conflicts, such as Yemen, Syria and Iraq.

Being in Iraq to participate in a workshop that targeted journalists, she said that journalists are “very important to get the humanitarian message out”.

Journalists can raise issues and discussions and collect cooperation for the International Humanitarian Law which is the law of war, in other words.

“Not only do they (the journalists) seek the truth and do reporting, but they are – indirectly – educators of the public.”

“The public sees the world through the journalists’ eyes, through their word, and through what they are saying.”

The ICRC tries to alleviate and eliminate the sufferings of the people affected by conflicts, she said.

Referring to the problems of the ICRC and other humanitarian bodies, she said that they work in area full of conflict, deaths and destruction, and that in such places, there are many parties to the conflicts, so the humanitarian bodies have to develop dialog with anyone that has control of a territory or has civilians under them to agree to let the humanitarian aides in.

Humanitarian bodies are not armed and don’t have armed escort, so through conversations, they make the warring parties to guarantee their entrance to help the people caught in desperate situation caused by conflicts, she said.

She added that they are constantly in danger, because, for example, they can’t know when the road is going to be blocked or when there will be heavy clashes, again.

“We are many times caught in between … But we try our best. We want to be the first to enter and the last to leave to make sure the humanitarian situation has been brought under control and not to deteriorate.”

She added that politics is part of conflicts worldwide and apparently a hurdle to the humanitarian operation of the relief aid workers and that the ICRC sometimes, though reluctantly, gets “dragged into politics”.

“Our work is not to point fingers or condemn. It is to be active to address critical situation on the ground by help.”

She said the reports of the ICRC go directly to the entity that is in charge. “We don’t usually go public.”