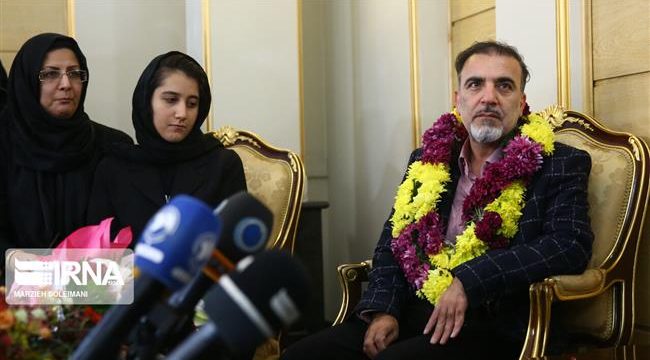 US jailers had told inmates I was a terrorist: Iranian scientist

Press TV – Iranian stem cell scientist Dr. Masoud Soleimani, who returned home Saturday after being released from US prison, says his jail wardens had told other prisoners that he was a terrorist with a mission to carry out bombings in the United States.

Recounting his ordeal at the hands of American jailers, Soleimani described the United States as “the number one enemy” of Iran and the Iranians.

Soleimani — who works in stem cell research, hematology and regenerative medicine — was on a sabbatical when he was arrested by US authorities upon arrival in Chicago a year ago and transferred to a prison in Atlanta, Georgia.

“US authorities in the jail had told prisoners that I was a terrorist who wanted to carry out bombings in America,” he told reporters upon arrival at Tehran’s Mehrabad airport on Saturday night.

“They had made such false statements so that other prisoners would not come close to me and keep away from me.

“After a while, the inmates would tell me, ‘you do not look like a terrorist and a bomber, what these guys are saying and I would tell them I don’t know what they are saying’,” he said.

“The Americans were so mean and low that when I told them that many patients were waiting for me to have their things done, they said, ‘let them die, it doesn’t matter’,” he said on Saturday.

“This shows their main problem is with the Iranian people. They are upset and angry about the scientific progress and the right path that Iran has taken, and we have a duty to continue this path so that the country can grow and prosper.”

Soleimani suffered from several health problems which aggravated during his incarceration.

Iranian Foreign Minister Mohammad Javad Zarif in September said in an interview with NPR that he had pushed for an exchange of a US citizen held in Iran for espionage for Soleimani.

The prisoner exchange came on Saturday that saw the Iranian scientist released for Xiyue Wang.

On Saturday, Trump bounced on the prisoner exchange to claim a diplomatic triumph at a time when he is under immense pressure while Democratic lawmakers are making a case to impeach him.

“Thank you to Iran on a very fair negotiation,” tweeted Trump. “See, we can make a deal together!” wrote the US leader.