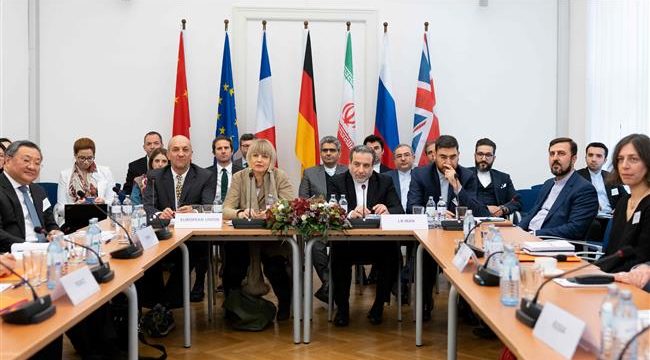 AP  | KIYOKO METZLER: World powers pressured Iran on Friday to reverse recent atomic activities that violate the landmark 2015 nuclear deal, but stopped short of deciding on whether to proceed with a move that could see the case brought before the UN Security Council and a “snapback” of sanctions that had been lifted under the accord, according to a Chinese official.

Fu Cong told reporters after the meeting that brought together Iran with the five powers remaining in the deal that China had argued against invoking the so-called dispute resolution mechanism of the agreement.

“Iran has made it very clear that all the actions are reversible and that they are ready to come back to full compliance,” he told reporters.

The agreement, known as the Joint Comprehensive Plan of Action, has been unraveling since the unilateral withdrawal of the United States last year and the re-imposition of American sanctions, which has left Iran’s economy struggling.

In response, Iran has recently exceeded the stockpiles of uranium and heavy water allowed by the deal, and has started enriching uranium at a purity level beyond what is permitted.

Tehran’s violations — all announced in advance and verified by International Atomic Energy Agency inspectors — have been an attempt to pressure the other world powers involved — France, Germany, Britain, China and Russia — to offer new economic incentives to offset the effect of the American sanctions.

Iran has previously suggested it would walk back those activities if it receives the economic incentives it needs.

Following the meeting, Iranian representative Abbas Araghchi told reporters that he thought the world powers “are interested to find practical solutions so they can continue their economic cooperation with Iran.”

“We see that seriousness amongst these countries, but of course there are problems and obstacles in the way,” he said.

European Union foreign policy official Helga Schmid, who chaired the meeting, tweeted that “we have a collective responsibility to preserve” the agreement. She said she “urged all participants to report back to their capitals as strong efforts are needed by all sides.”

Before the Vienna talks, German Foreign Ministry spokesman Christofer Burger told reporters in Berlin that Iran’s approach was “unacceptable” and that diplomats would make that clear at the Vienna meeting.

“We will underscore that Iran must fully reverse its breaches of the JCPOA,” he said.

The European nations involved have threatened that they could invoke the dispute resolution mechanism, which can be triggered by any party to the JCPOA, if Iran does not comply.

That mechanism is a month-long process, which could lead to the matter being brought before the U.N. Security Council and could result in the eventual “snapback” of sanctions that had been lifted under the deal.

Fu, the only diplomat other than Araghchi to talk with the press on the way out of the Vienna meeting, said there was no timeline given at the talks for when the mechanism could be invoked.

He said that in China’s view it would be better to resolve the issues with Iran directly through JCPOA talks.

“Bringing this issue to the Security Council is not in anybody’s interest, except the U.S. maybe,” he said.

David Rising contributed to this story from Berlin.