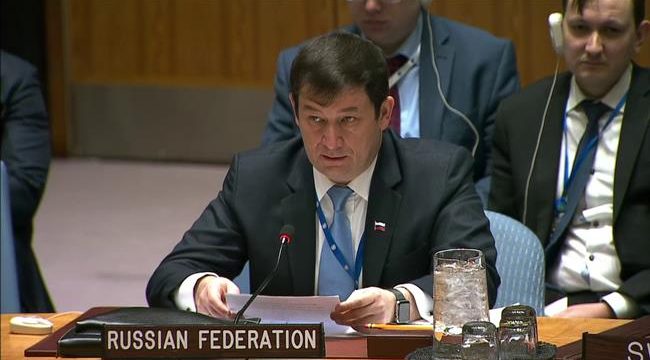 Press TV – Russia’s mission to the United Nations says the US continually tries to demonize Iran’s missile activities despite lack of any damning evidence against the Islamic Republic’s defensive activities, and while Washington itself is in default of several international non-proliferation agreements.

Dmitry Polyanskiy, Moscow’s chargé d’affaires to the world body, addressed the remarks to the UN Secretary-General António Guterres in a letter dated November 26 that was made available on Friday.

He reminded that Iran was a signatory to many multilateral non-proliferation mechanisms, including the nuclear Non-Proliferation Treaty (NPT) and the Joint Comprehensive Plan of Action (JCPOA). The latter agreement came about in 2015 between the Islamic Republic and the P5+1 group of states — the United States, the UK, France, Russia, and China plus Germany, lifting nuclear-related sanctions against Tehran, which, in turn, voluntarily changed some aspects of its nuclear energy program.

Washington has, on numerous occasions, accused Tehran of developing nuclear-capable missiles, despite Tehran’s outright rejection of nuclear weapons of all type, and its observance of the JCPOA, which prohibits it from pursuing such armaments.

The Russian official highlighted “the complete lack of evidence that Iran is developing or producing a nuclear weapon or means of its delivery or is deploying any infrastructure for the storage or servicing of nuclear weapons.” He further endorsed the Islamic Republic’s continued commitment to the nuclear deal as verified by Tehran’s “refraining from activities related to ballistic missiles that are designed to be capable of carrying nuclear weapons.”

Nor has the UN Security Council, which has endorsed the JCPOA in the form of Resolution 2231, has received any “viable information to the contrary,” Polyanskiy asserted.

However, he stated, the US would keep trying to implicate Iran in nuclear arms-related activities by, among other means, citing the Missile Technology Control Regime (MTCR). This is while the MTCR is an informal political understanding between 35 states on export control issues, and could not be deployed as a universal legally binding instrument or used in the context of Resolution 2231 to try and incriminate Iran’s missile activities, the envoy added.

Washington was on the offensive against Iran, while itself left the JCPOA last year “in violation of Article 25 of the United Nations Charter,” and is preventing other states from implementing it, Polyanskiy added. After leaving the deal, the White House returned its sanctions against Tehran, and also started pushing other JCPOA members into abiding by the American bans.

The Russian envoy also reminded how America left the Intermediate-Range Nuclear Forces (INF) Treaty with Moscow earlier this year, and was undermining efforts aimed at creating a Middle East region free of nuclear arms. He was referring to the US’s using its veto power at the UN in favor of Israel, which is the sole nuclear armed power in the region and has refused to join the NPT.