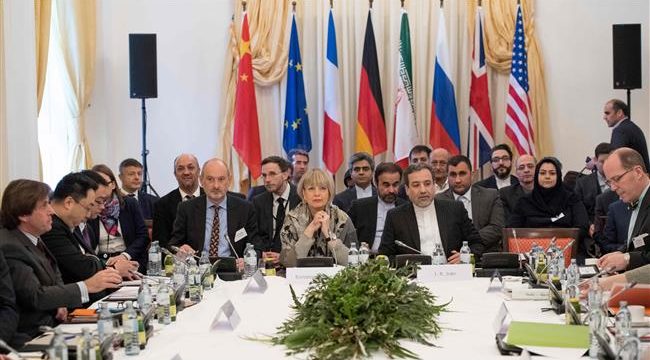 IRNA – In halfway through the fourth step in Iran’s scaling back the JCPOA- related commitments, Vienna on this day is to once again host a joint commission meeting of the Joint Comprehensive Plan of Action to examine Iran’s peaceful nuclear related activities.

According to IRNA, the 14th meeting of the joint commission will be attended by Deputy Foreign Minister Abbas Araghchi, Secretary-General of the European External Action Service Helga Schmidt and representatives of Russia, China, Germany, France and the United Kingdom. Araghchi, who has spent many days in China and Japan, arrived in Vienna hours earlier to attend the meeting.

The fourth step to cut Iran’s commitments in the JCPOA commenced from a month ago with the order of Hassan Rouhani, the Iranian President, to feed gas into the centrifuges in Frodow’s facilities and enrichment by 4.5 % in the facility.

Some Western media have suggested that today’s Vienna summit may be held in a different atmosphere than previous ones.

On Wednesday, and just two days before the 14th Joint Commission on the JCPOA, European Troika representatives including Britain, France and Germany at the United Nations wrote in a letter to Antonio Guterres, the secretary-general of the organization, claiming that Iran’s ballistic missiles could carry nuclear warheads which is contrary to the request of the Security Council from Tehran.

This deliberate move by the European Troika shortly before the meeting of the Joint Commission on the JCPOA met with a strong response from the Foreign Minister of the Islamic Republic of Iran.

Mohammad Javad Zarif yesterday (Thursday), in a tweet, responded to the European Troika’s accusatory letter to the UN over Iran, calling the letter a desperate act to cover up these countries’ inefficiency in fulfilling their obligations.

Iranian Foreign Minister Mohammad Javad Zarif in a message on Thursday described EU letter to the UNGA as a cover-up to hide their incompetence with regard to Iran’s nuclear deal.

“Latest E3 letter to UNSG on missiles is a desperate falsehood to cover up their miserable incompetence in fulfilling bare minimum of their own #JCPOA obligations,” Zarif tweeted on Thursday.

“If E3 wants a modicum of global credibility, they can begin by exerting sovereignty rather than bowing to US bullying,” he added.

Representatives of Germany, UK and France in a letter to the UN Secretary-General António Guterres claimed that Iranian ballistic missiles are capable of carrying nuclear warheads which is against UNSC request from Tehran.

They urged UN chief to inform the UNSC that Iran’s missile activities are incompatible with its resolutions verifying 2015 nuclear accord.