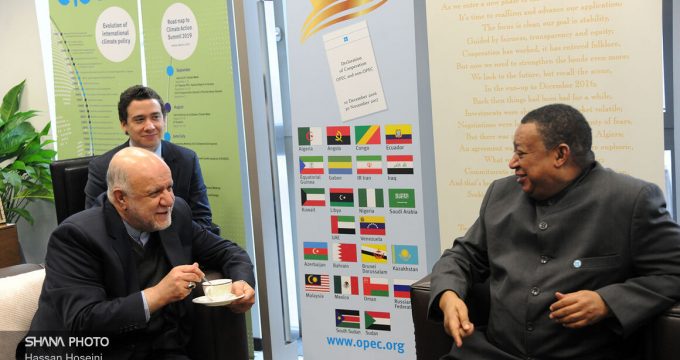 SHANA – Iranian Minister of Petroleum Bijan Zangeneh said he and his team would never give up on the Iranian nation’s rights.

Talking to reporters prior to the 172nd Conference of the Organization of the Petroleum Exporting Countries (OPEC), Zangeneh said: “Speaking on behalf of the Iranian nation, I would say this is the right of our people and nation and I would not agree with cutting even a barrel of oil for illogical reasons.”

He said: “Currently, our oil has been driven out of the market and those who have more output must undergo deeper cuts in the future.”

“No one must expect Iran to reduce its output in the wake of eased sanctions in the future.”

“Yesterday, I wrote a letter to the conference president and asked him to inform other OPEC members that Iran has involuntarily reduced its output and produced less than its historical quota. Those who produce more oil must cut their output deeper,” he added.

The Iranian Minister of Petroleum is now in Vienna to join the OPEC Conference.

OPEC meets on Thursday in Vienna followed by a meeting with Russia and others, a grouping known as OPEC+, on Friday.

OPEC+ has curbed supply since 2017 to counter booming output from the United States, which has become the world’s biggest producer.