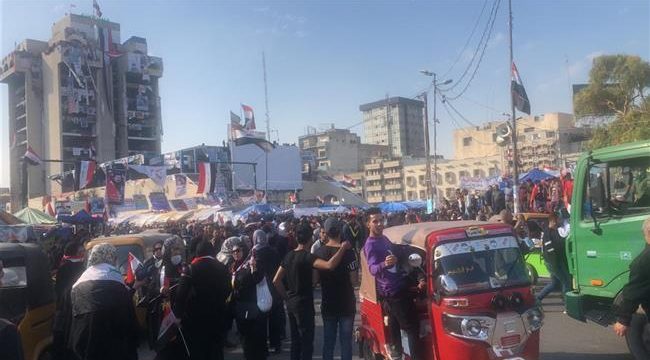 Iraqis hold mass rally in Baghdad to back religious authority

Press TV – Iraqis have taken to the streets of the capital, Baghdad, in a show of support for the country’s religious authority, who has demanded peaceful anti-government protesters distance themselves from saboteurs.

The demonstrators marched to Baghdad’s iconic Tahrir Square on Thursday, demanding that non-peaceful protesters be sidelined during the ongoing protests against the economic woes.

They were chanting slogans and waving placards reading, “Death to USA.”

In a Friday prayers sermon read by his representative, Iraq’s most prominent Shia cleric Grand Ayatollah Ali al-Sistani urged protesters not to allow attacks on people and their property.

“It is imperative on peaceful demonstrators that they separate their ranks from non-peaceful individuals and cooperate on shunning saboteurs — whoever they are — and not allow them to abuse peaceful protests to damage and attack the property of citizens,” he said.

That statement came two days after a group of rioters stormed into Iran’s consulate in Iraq’s holy city of Najaf and set it ablaze.

The rallies resumed on October 25 after a pause of about two weeks, but took a violent turn, with some participants vandalizing public property and opening fire on demonstrators during the mayhem.