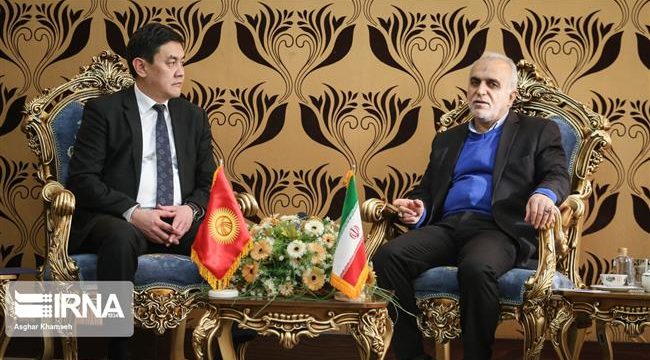 Iran, Kyrgyzstan plan to increase trade ties by over 10 times

Press TV – Iran and Kyrgyzstan have vowed that bilateral trade would exponentially increase in the near future mainly because of Iran’s decision to launch a free trade zone with the Eurasian Economic Union (EAEU), a major trade bloc where Kyrgyzstan is a member.

Iran’s minister of trade Reza Rahmani said on Wednesday that economic exchanges between Iran and Kyrgyzstan, a small country of more than six million people in Central Asia, would soon increase to nearly $500 million, up from a meager figure of $40 million that exists currently.

Rahmani, speaking to reporters after a meeting with Kyrgyzstan’s minister of economy Sanjar Mukanbetov in Tehran, said that trade between the two would further surge in the years to come.

He said the two countries have agreed on efforts that would facilitate the trade schemes, including the launch of direct flights and easing visa restrictions for economic delegations.

Rahmani said Iranian manufacturers have declared plans for investment in Kyrgyzstan as they seek to have more access to the markets in the Central Asia region.

The minister said Iran was also keen to increase meat imports from Kyrgyzstan to meet a rising domestic demand.

Mukanbetov, for his part, said that Kyrgyzstan was intent on removing trade barriers with Iran now that the EAEU has lowered tariffs for the export of the Iranian products.

Mukanbetov said his country had already adopted measures such as allowing a barter mechanism for certain goods to avoid American sanctions that limit exchanges with Iran.

The minister also said after a meeting with his Iranian counterpart Farhad Dejpassand that Kyrgyzstan was seeking to secure Iran’s assistance for various energy and transportation projects in the country.

Dejpassand said a main mechanism to finance those projects would be for the two countries to issue joint bonds.