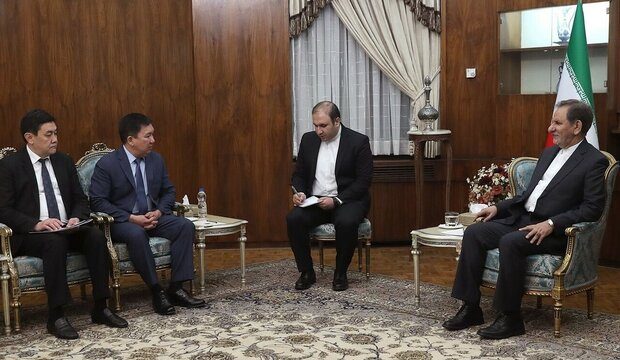 Iran, Kyrgyzstan can use own currencies to boost trade: Jahangiri

“Iran and Kyrgyzstan can use their national currencies so as to expand their mutual economic relations,” Jahangiri said in a meeting with Kyrgyzstan’s Minister of Transport and Roads Zhanat Beishenov and Minister of Economy Sanzhar Mukanbetov in Tehran on Wednesday.

The Iranian vice president expressed hope for achieving a roadmap to the development of bilateral ties, noting that the “successful meeting of the Joint Commission on Economic Cooperation between the two countries” is a harbinger of hope to materialize such goals.

Referring to the plans for the promotion of regional interaction within the framework of the Eurasian Economic Union, Jahangiri said the agreements to operate direct flights between Tehran and Bishkek wil greatly facilitate business trips between the two countries.

He pointed to the “great technical and engineering capabilities” of Iran, saying the country is ready to carry out projects on construction of roads, dams and large industrial factories in Kyrgyzstan.

Beishenov, for his part, thanked Iran for assisting with the construction of a sports complex in Kyrgyzstan and highlighted Iran’s role and membership in the Eurasian Economic Union.

The official expressed hope the two countries can explore the avenues to increase their already satisfactory relations.