Sanctions may have fueled Iran protests, but have yet to further US goals

The New York Times | David E. Sanger: President Trump likes to say that Iran is “a different country” after 18 months of punishing American sanctions, and the protests sweeping Iranian cities suggest he may be right. Even his most vociferous critics acknowledge that Mr. Trump’s “maximum pressure” campaign helped fuel that unrest.

But it is far from clear that what is unfolding on the streets today will make Iran more likely to renegotiate its nuclear deal or dial back its malign actions in the region, the two major American goals in dealing with the country.

If the lessons of the Arab Spring and the last big Iranian protests in 2009 are any guide, the crackdown on protesters may well succeed — and the Iranian government will press its case that the uprisings are more evidence of a broad American plot to destabilize the government. And even if Iran’s leaders begin to give some ground, it’s not enough to make partial concessions that don’t address Washington’s fundamental complaints, some administration officials have acknowledged in interviews. The government has to crack in the right way, and that is far from assured.

Secretary of State Mike Pompeo told “Fox & Friends” on Monday that the United States was supporting the protesters and that “we’ve done our best to make sure they can continue to communicate by using the internet,” despite a brief effort last week by Iran’s leadership to shut it down “in its entirety” in the country.

He was referring to a quiet American effort, dating back several years, to provide ordinary Iranians with tools to encrypt communications and other ways to communicate without government interference — what the United States calls free speech, and what the Iranian government calls an interference with its cybersovereignty.

But poking holes in Iran’s digital dragnet is a tactic to keep the protests going, not a strategy for transforming Iran’s behavior. And it runs the risk of playing into the Iranian government’s narrative that American efforts are aimed at regime change rather than a change of behavior — and has echoes of “Operation Ajax,” the C.I.A.’s recently acknowledged role in supporting a coup in the country in the mid-1950s.

And while Americans have long forgotten that episode, Iranians certainly have not, something Iran’s leader, Ayatollah Ali Khamenei, is certainly aware of as he tries to ride out the uprisings.

In a series of speeches over the past year, Mr. Pompeo and his special envoy for Iran, Brian H. Hook, have made their strategy clear: By constantly ramping up sanctions, they are betting that Ayatollah Khamenei and the government of President Hassan Rouhani will decide that the cost at home is not worth resisting the United States’ pressure but simply cannot say when, or how, that will happen. And they may be proved right: It was a mix of sanctions and sabotage that forced Iran to the table seven years ago, leading to the 2015 agreement that Mr. Trump discarded last year.

“There is a universe in which the Iranian leadership, given the severity of the crisis, seizes this moment to reach a deal with the U.S. that would remove these sanctions in exchange for Tehran complying with the nuclear deal and starting negotiations on a new, broader agreement,” said Robert Malley, the president of the International Crisis Group and one of the negotiators of the 2015 accord when he served on President Barack Obama’s National Security Council. 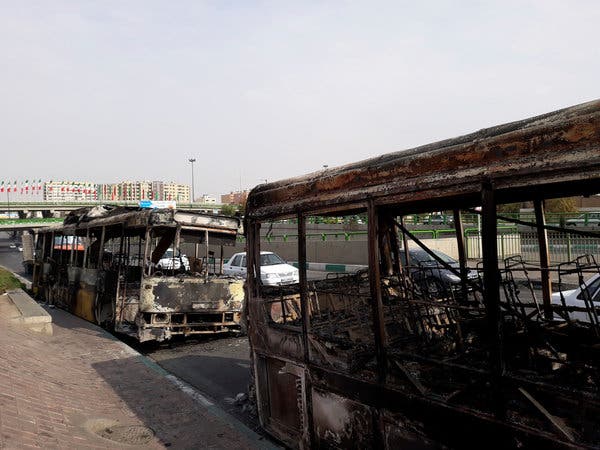 Mr. Malley added that it was also possible that the Trump administration, “recognizing the limits of its maximum-pressure campaign in curbing Iran’s nuclear or regional ambitions, agrees.”

But the far more likely scenario, given the mood in both capitals, he said, was “one in which the Iranian regime views the unrest chiefly as a foreign, U.S.-inspired plot and refuses to negotiate from a position of weakness.”

Meanwhile, he said, Mr. Trump and Mr. Pompeo, “buoyed by the sense that its pressure campaign can bring the regime to its knees,” double down.

That standoff appears to be where things are now headed. Mr. Pompeo insisted on Monday that the root of the protests was not the sanctions but what Iranian leaders had done to their economy. In fact, both contributed: incompetent economic leadership and a crushing reduction in oil revenue.

But he may be underestimating the ayatollah’s skills in putting down dissent over 30 years in office. He “doesn’t feel existential angst,” said Karim Sadjadpour, an Iranian-American scholar at the Carnegie Endowment for International Peace in Washington.

The pressure on the leadership will not build “unless and until we start seeing fissures among Iran’s security forces, and so far there are no signs of that,” he added.

The key question is whether economic conditions deteriorate. Mr. Hook noted in an interview on Monday that as the country cuts back further on subsidies, there will be more protests of the kind spurred by the 50 percent surge in gasoline prices. “The regime is running out of money after wasting billions on proxy wars and graft,” Mr. Hook said. “We expect to see additional subsidy cuts and rationing.”

Even if that proves right, Ayatollah Khamenei may in fact be betting that he can wait things out until the American elections, hoping that any Democrat who may be elected would restore the 2015 agreement. It is an uncertain bet — few have made that commitment, and it is almost unimaginable that any future American president would re-enter the agreement without getting something from Iran in return.

In many ways, the decisions the administration finds itself confronting now are similar to the ones the Obama administration confronted in 2009 amid the outbreak of the so-called Green Revolution. It was the first uprising of Mr. Obama’s presidency, less than five months after his inauguration. He reacted with a caution that many of his aides later regretted, declining to speak out in favor of the protesters for fear that it would play into the hands of the Iranian government.

Mr. Pompeo took a swipe at that approach on Monday.

He went on to trumpet the somewhat vague effort to put technology into the hands of the Iranian people to allow them to communicate — and slip out images of the carnage as Iranian forces opened up on protesters in places like Mahshahr, a city of 120,000 people where the Revolutionary Guards crushed protesters on Nov. 18, killing as many as 100.

“After the 2017-18 protests in Iran, we accelerated efforts to enable Iranians to communicate with each other and with the outside world,” Mr. Hook said on Monday. Over the past few weeks, he said, “tens of thousands of Iranians used circumvention tools facilitated by the U.S. and our partners, even during the shutdown.”

But both the State Department and American intelligence officials were surprised that the Iranian government took the extraordinary step of shutting down the entire domestic internet infrastructure, even if only for a few days. Taking such an extreme step may have been part of an effort to undercut the use of those American-provided tools, which encrypt communications and give alternate pathways to transmit messages. But no one envisioned a total network shutdown.

Now American officials are trying to examine exactly what happened, and why the Iranians turned the system back on. One senior intelligence official said the best guess so far was that when the government turned off the network, it prompted all kinds of side effects — including a halt to many kinds of commerce — that only worsened the economic pain.

In the meantime, the administration is lauding what it says is a partial victory. Yes, the Iranians may be trying to reassemble the elements of the nuclear program, it notes, and they have not yet re-engaged in negotiations. But the uprisings are soaking up political time and attention.

“Because of our economic pressure campaign,” Mr. Hook insisted, “the regime has far less money and less time to spend on its ambition to dominate the Middle East. This reversal was long overdue.”