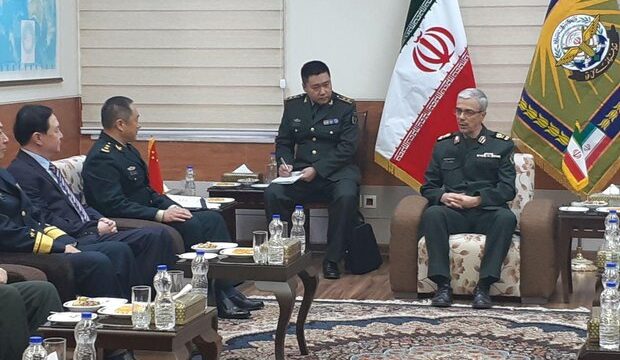 MNA – Chief of General Staff of Iranian Armed Force, Major General Mohammad Hossein Bagheri announced on Tuesday that the 25-year-cooperation roadmap between Iran and China is confirmed by the Leader of the Islamic Revolution Ayatollah Seyyed Ali Khamenei.

He made the remarks in a Tuesday meeting with Chinese Deputy Chief of the Joint Staff Department Lieutenant General Shao Yuanming in Tehran, while the Second Iran-China Joint Commission on Military Relations took place in the Iranian capital on Monday.

He underlined that other countries’ stances and their animosity will not impact the two sides’ relations and Tehran and Beijing are resolved to expand their mutual ties.

In this meeting, the two sides conferred on military cooperation in the long-run besides the common threats both countries are faced with in west Asia and south of the China.

The Chinese General, is paying a visit to Iran leading a high-ranking military delegation.

On Monday, he met Commander of Iranian Navy Rear Admiral Hossein Khanzadi, the Head of the IRGC Aerospace Force Amir Ali Hajizadeh and some other Iranian senior officials.

It is worth noting that Iran, China and Russia will soon stage a joint wargame in northern Indian Ocean. “After this wargame, there will be one with the naval forces of the Indian Ocean littoral states, which will be held within the framework of the Indian Ocean Naval Symposium (IONS), in a bid to promote convergence among the navies and achieve security in this region through collective contributions from all forces situated there,” Kahnzadi said in late November.