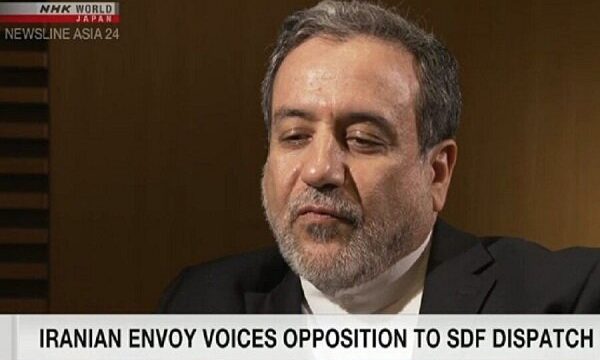 Araghchi gave NHK an exclusive interview on Tuesday during his visit to Japan as a special envoy for Iranian President Hassan Rouhani.

He said Tehran is waiting for Japan’s final decision, but it doesn’t believe that the presence of any foreign forces in the region would help boost stability, security or peace.

He noted that he had conveyed Iran’s stance to Japanese Prime Minister Shinzo Abe in a meeting.

After delivering President Rouhani’s letter to Japanese Prime Minister Abe, the Iranian diplomat explained the position of the Islamic Republic of Iran on the Iran nuclear deal or the JCPOA.

Araghchi also declared Iran’s readiness to return to fully abiding by its commitments to the JCPOA if sanctions are lifted.

He said US policies are the root cause of escalating tensions in the Middle East. He criticized the US for imposing “maximum pressure” on Iran and withdrawing from the 2015 nuclear agreement.

Araghchi also said that if Iran cannot benefit from the nuclear deal, the country will certainly take the next step, including the rejection of the International Atomic Energy Agency’s inspections.

Iranian Deputy Foreign Minister Abbas Araghchi traveled to Tokyo on Monday as the second leg of his trip to East Asia.