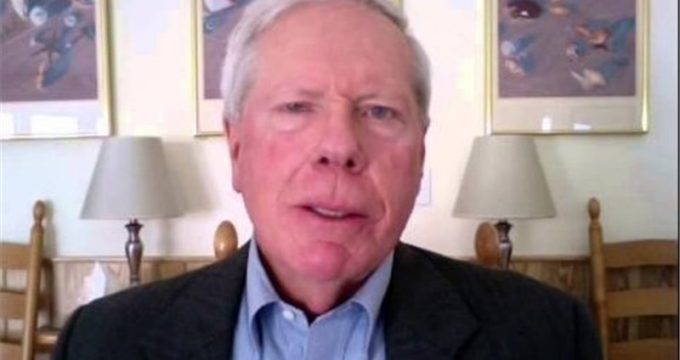 “The riots were organized by the CIA just as in Ukraine, Hong Kong, Georgia, the “Arab Spring.” Why is this not obvious to Iran?” Craig Roberts, current chairman of the Institute for Political Economy, told Tasnim.

From early 1981 to January 1982, Roberts served as Assistant Secretary of the Treasury for Economic Policy. After his time in government, he turned to journalism, holding positions of editor and columnist for The Wall Street Journal, columnist for Business Week, the Scripps Howard News Service as well as contributing editor to Harper’s Magazine. Roberts was a professor of business administration and professor of economics at George Mason University and was the inaugural William E. Simon Chair in Political Economy at Georgetown University, serving for 12 years.

Tasnim: In an interview with BBC Persian on Nov. 21, the US special representative for Iran, Brian Hook, said Washington is “very pleased” with protests over a fuel price hike in Iran, adding that the maximum pressure against Iran will continue. Trump and Secretary of State Mike Pompeo also took to Twitter to express support for the protesters. Open support for rioters has just reinvigorated the Islamic Republic’s official narrative that the real goal the United States pursues through maximum pressure is not to bring Iran to the negotiating table but to cause “regime change” in the country. What do you think? What is behind this kind of US policy?

Roberts: The real question is: Why did the Iranian government play into Washington’s hands by raising fuel prices?

Tasnim: Reports by Iranian intelligence services say that the US and its allies in the region meddled to stoke recent unrest in Iran. They say clues have been found proving that they intervened to create the turmoil. Bahman Reyhani, a military commander in Kermanshah, said “the rioters belonged to anti-revolutionary groups and America’s intelligence services”. What are your thoughts on this?

Roberts: Washington is expert at bringing “color revolutions,” such as the Green Revolution in Iran. Most of them succeed. The real question is why do countries permit Washington-funded and organized NGOs to operate in their countries as Fifth Columns? Why are not the subversives arrested and the organizations broken up?

Tasnim: On Wednesday, the director-general of the anti-espionage department of the Iranian Intelligence Ministry said a number of elements that were seeking to collect information on the riots and transfer it to foreign countries were identified and arrested before they could carry out their mission. “These elements that had received CIA-funded training in various countries to gather information under the guise of citizen-journalists had been monitored for quite a long time,” the official said. How much do you think the CIA, Mossad and Saudi spy agency were involved in the riots?

Roberts: The riots were organized by the CIA just as in Ukraine, Hong Kong, Georgia, the “Arab Spring.” Why is this not obvious to Iran?

Tasnim: Iranian officials have repeatedly said that US sanctions against Tehran have dealt a blow to the prospects of talks between Washington and Tehran. It seems that Trump administration has closed the door to diplomacy. Do you share the opinion that the White House is not interested in diplomacy when it comes to Iran?

Roberts: Washington is not interested in diplomacy in its dealings with any country, even far more powerful countries than Iran, such as Russia and China. Washington uses threats and force, not diplomacy. A person would think that Iran would know that by now.