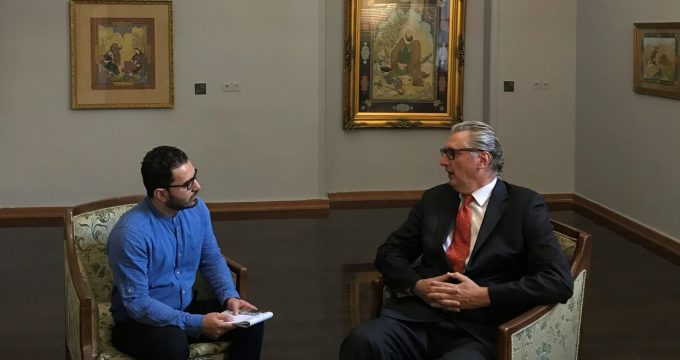 He made the remark during an interview with IRNA correspondent which took place at the sideline of an expert seminar attended by officials and specialists from both countries.

In his remarks, Werner outlined his positive image of Iran and noted that Iran and the Netherlands had plenty in common, plenty to work on together.

He further described Iran as a responsible member of the international community and said his country is eager to work with Iran in various fields.

The Dutch Ambassador also expressed happiness over the Netherlands’ decision to join INSTEX and believed safeguarding the landmark nuclear deal between Iran and a number of world powers was necessary for maintaining stability in the region.

Werner said: “Obviously INSTEX is to counterbalance the situation that has risen from the re-imposition of the American sanctions.”

“It is basically a commitment to provide for European companies who want to trade with Iran and an alternative payment.”

“We will start with the humanitarian sector which means basically medications and food and we hope to expand to other sectors as soon as possible,” he noted, expressing happiness over the recent decisions made by Belgium, Denmark, Sweden, Finland, Norway, and the Netherlands to join INSTEX.

Earlier in a statement the six mentioned European states had announced that “in light of the continuous European support for the agreement and the ongoing efforts to implement the economic part of it and to facilitate legitimate trade between Europe and Iran, we are now in the process of becoming shareholders of the Instrument in Support of Trade Exchanges (INSTEX) subject to completion of national procedures.”

The Dutch senior diplomat went on to note that “INSTEX is a value in itself but is also related to the JCPOA that Iran has kept to its obligations.”

“We like to stress that JCPOA is very important for stability in the region,” he said referring to the delaying in implementation of the INSTEX.

“For Iran, as a responsible member of the international community, we hope that we can continue but there is a lot of stress surrounding the JCPOA,” Werner said, underlining Iran’s recent choice to reduce parts of its nuclear-related commitments.

Iranian President Hassan Rouhani has ordered gas be injected into 1,044 centrifuges rising the country’s enrichment level to near 9,500 Sus which is very close to the time before the nuclear deal.

During the last stages, Iran first surpassed the 300 kg cap on enriched uranium, then the enrichment level rose past 3.67% to 4.5%.

Elaborating on the level of bilateral relations, Werner said: “We are constantly looking to expand the economic relationships with Iran.”

“Obviously it has not been easy in the last few years with sanctions and even in this difficult time, we kept on looking for alternative payment systems and ways. On the other hand, we have been looking at in what areas can we create new partnerships,” he stressed referring to the Netherlands’ diplomatic mission’s efforts with this regard.

“The next step is water, energy, and food are ones that we have written reports about for Iran and how we can frame our relationships,” he noted.

“We are trying out a holistic approach and we also believe that it’s another matter that we would like to put on the agenda on climate change.”

“We like to put on the agenda circular economy which is relevant to its nexus but also to the waste and to natural resources, he said adding that the Netherlands is committed to creating a circular economy by 2050.

“So what we now have are often too much linear economy by natural resources from the beginning and waste in the end.”

“We see that natural resources are depleting so we have less of them and on the other hand we have the waste issue that is gigantic in the world,” Werner reiterated.

Commenting on the Netherlands’ decision to establish a circular economy in the future, he explained that it means “we will reduce our intake of natural resources and primary goods and we are going to get rid of wastes.”

For much of the interview, Werner pointed to the reason behind holding Iran-Netherlands workshop on water and waste, saying: “We have cooperation between Dutch companies and the government and knowledge-[based] institutions in order to explore what opportunities we can bring to Iran in water and wastewater sector.”

“So it is a means to reach out for these companies and in the health sector to jointly approach the Iranian market and see what is possible and how we can have cooperation and transactions,” he added.

He noted that the event was aimed to get all the stakeholders around the table from Iran to have a look at what the Netherlands offers in terms of solutions for water and wastewater.

When asked by IRNA reporter to comment on the water management crisis, he said: “Probably [it is] the most strategic commodity in the world that is under stress because of climate changes.”

“In the Netherlands, we have already had a lot of water from rivers, sea and also from the rain and we see that in these seasons it is getting even more whereas our summers are getting wider,” he underlined.

“And at the same time there are more sand and dust storms.”

“We need to innovation and cooperation and we need to return to balance,” Werner reiterated.

“We need to jointly stop the causes that produce climate change.”

The workshop on waste and water as a joint program by Iran and Netherlands was held in the attendance of the Netherlands Ambassador to Tehran Jacques Werner, Head of Federation of Science and Technology in Islamic countries Mehdi Karimi, an EU expert in financing water and wastes Hessel Schuurman together with a number of Iranian officials from Tehran Municipality.