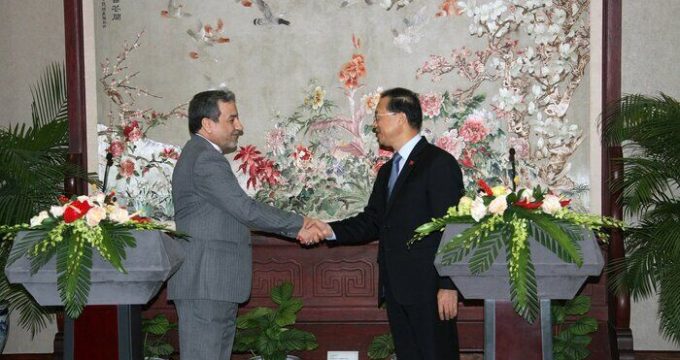 IRNA – Iran’s Deputy Foreign Minister Abbas Araghchi said in Beijing on Sunday that Iran nuclear deal is an achievement of international diplomacy and multilateralism, so all the signatories to JCPOA to honor their commitments.

He made the remarks in a joint press conference with his Chinese counterpart Ma Zhaoxu,

He said that since day one of the JCPOA, Iran has always held consultations with China over saving the international Agreement.

Araghchi said that the JCPOA is an agreement endorsed by the United Nations Security Council Resolution 2231 and that the US pullout from the international deal is an outright violation of the UNSC Resolution.

He said that Iran has reduced commitments to the JCPOA and that no state should question Iran’s remedial action for renegade on the nuclear deal by the US and the other states parties to the Agreement.

Araghchi said that the International Atomic Energy Agency, the UN nuclear agency, has repeatedly verified that Iran abides by the JCPOA.

He said after the US quit the deal, Iran stayed fully committed to its JCPOA commitments for a year before starting to reduce them. Iran’s reduction of its commitments doesn’t mean it is quitting it and the Article 36 of the deal has envisaged remedial action for Iran when the other party does not abide by its commitments.

Article 36 of the deal says, “If Iran reach a point that any or all of the E3/EU+3 were not honoring their commitments to the JCPOA, Iran could refer the issue to the Joint Commission for settlement of the dispute. Similarly, if any of the E3/EU+3 believed that Iran was not meeting its commitments under this JCPOA, any of the E3/EU+3 could do the same ….. If the issue still has not been resolved to the satisfaction of the complaining participant, and if the complaining participant deems the issue to constitute significant nonperformance, then that participant could treat the unresolved issue as grounds to cease performing its commitments under this JCPOA in whole or in part and/or notify the UN Security Council that it believes the issue constitutes significant non-performance.”

Araghchi added that Iran welcomes efforts made by all the JCPOA parties, especially China, to resolve the dispute.

Calling China a strategic partner and thanking the Chinese officials, he said that the two countries will continue with cooperation on regional and international issues, including the JCPOA.

On Saturday Araghchi, who is on a visit to China at the invitation of his Chinese counterpart to discuss Iran nuclear deal, told IRNA that the fact is that the Europeans are still serious about INSTEX and regard it as a trade mechanism to keep financial ties with Iran, despite the US sanctions, is per se of value.

Belgium, Denmark, Sweden, Finland, Norway, and the Netherlands issued a joint statement announcing that they are joining INSTEX to enter trade with Iran and to safeguard the Joint Comprehensive Plan of Action (JCPOA) signed by Iran and the five permanent members of the United Nations Security Council plus Germany, from which the US unilaterally withdrew in March 2018 and re-imposed its sanctions on Iran. The INSTEX was designed in the first place to make up for the US unilateral pullout of the deal.

The statement said that the deal was endorsed by the UNSC and is also an important element in the non-proliferation regime of nuclear weapons.

Saying that the INSTEX is in the final steps of operation, Araghchi said that the INSTEX, even during sanctions, can cover 20 percent of the economic relations of Iran.

He added that of course the economic ties between Iran and China don’t need the INSTEX, the two countries have already designed their own mechanism. However, the Europeans said that after the INSTEX got underway and worked out, they will introduce the barter system to non-European countries as well.