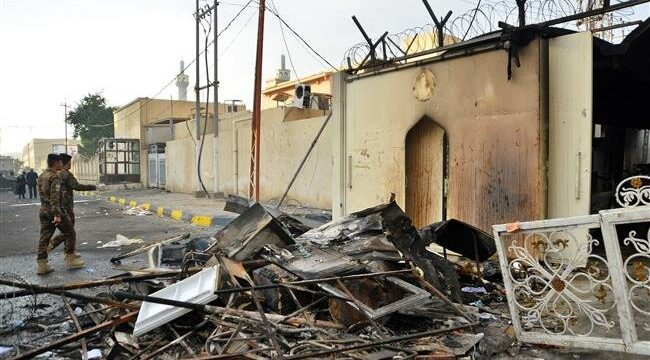 Press TV – Tehran and Baghdad have both condemned an attack on Iran’s consulate during riots in Iraq’s holy city of Najaf, with the Iraqi government saying the raid was actually meant to damage “historical” ties between the two neighbors.

On Wednesday, a group of rioters stormed into the Islamic Republic’s diplomatic mission in Najaf and set it ablaze. They also replaced the Iranian flag with an Iraqi one.

Police and civil defense first responders said the consulate had already been evacuated of its staff.

Reminding the Iraqi officials about their responsibility to protect diplomats and diplomatic missions, he said, “Iran has officially communicated its strong protest to Iraq’s ambassador in Tehran.”

In a tweet, Hossein Amir-Abdollahian, Iranian Parliament Speaker Ali Larijani’s special advisor on international affairs, said Saudi Arabia, Israel and the US are behind the unrest in Iraq.

Saudi and American embassies in Iraq, he added, are using the remaining Daesh elements in the Arab country to “defame” Najaf and Karbala.

Similarly, the Iraqi Foreign Ministry condemned the incident in strongest terms, saying the attack had been perpetrated “by strangers … distant from the reality of demonstrations taking place in a number of Iraqi cities.”

“We believe that its purpose is clear; to harm the historical relations between Iraq and Iran and countries of the world whose missions are in Iraq,” it said in a statement.

The ministry further warned against “the entry of persons who want to divert the demonstrations with the right demands from the seriousness of legal discipline and its proper course. The consulate in Najaf has been exposed to clear evidence of their agendas that are distant from the national demands; we stress the need to secure missions and not to expose those working in them.”

There are conflicting reports on the number of casualties in Wednesday’s attack, which led to the imposition of a curfew in Najaf.

Luay Yasiri, the governor of Najaf province, said Thursday that 47 police personnel had been injured during clashes with the rioters outside the Iranian consulate, adding that firefighters were still working to extinguish the fire.

However, a police official, who was speaking on condition of anonymity, told the Associated Press that one protester had been killed and 35 others wounded when police fired live ammunition to prevent them from entering the consulate.

In another development on Thursday, the Iraqi military announced that it had deployed commanders to the country’s strife-torn southern provinces to “restore order.”

“An emergency unit has been set up under the supervision of the governors” to “impose security and restore order,” it said in a statement.

“On the orders of the commander in chief of the armed forces, Prime Minister Adil Abdul-Mahdi, some military commanders have been appointed to this unit to direct and control all security and military forces and assist the governors in their mission,” he added.

Earlier this month, a group of assailants attacked the Iranian consulate in the holy Iraqi city of Karbala, scaling concrete barriers surrounding the building.

Heads of Karbala tribes apologized to the Iranian nation and government over the incident and stressed brotherly relations between the two countries.