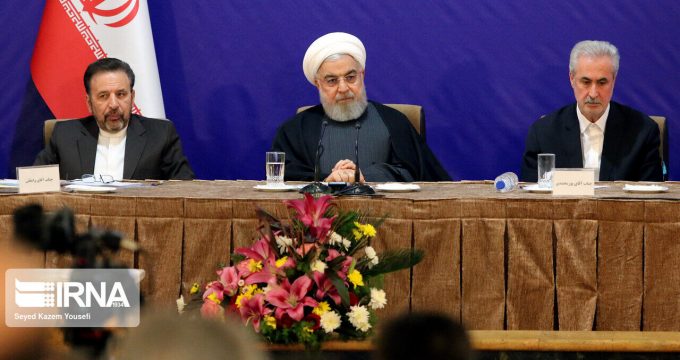 Rouhani: Iranians not to bow to enemies’ conspiracies

IRNA – Iranian President Hassan Rouhani referred to enemies conspiracies against Iranians, saying Iranian people will continue their way and will not bow to pressures.

Speaking to reporters at the end of his tour to East Azarbaijan Province, the Iranian president said that people of Azarbaijan have never let enemies win and have preserved their independence and dignity.

He added that the trip was aimed at visiting quake-stricken areas and emphasizing facilitating rendering services to people.

He noted that the Iranian government is determined to change Urmia Lake to tourism and treatment hub, adding that reviving the lake will be followed up seriously.

Elsewhere in his remarks, President Rouhani described the environment as important for people’s health and life.

He added that an agreement has recently been signed between the energy ministries of both countries.

Armenian prime minister has promised to follow up on removing pollution.

With regard to signing a contract with Eurasian Union, which is important for commerce, there is a major shift in exports, based on which 800 items are exempted from customs tariffs.

Grounds have been prepared for developing political and economic relations between Iran and neighboring countries.

Earlier, Rouhani said the Iranian government considers problems of the quake-hit people as its own and will stand by them, promising to help them leave behind the hardship due to the destruction of the houses.

He promised the people of Dastjerd that the government will support them by paying all costs of the reconstruction of the damaged houses.

An earthquake measuring 5.9 on the Richter scale shook the city of Tark in the northwestern province of East Azarbaijan in the early hours of November 8, claimed lives of five people and injured several others.

President Rouhani, who arrived in East Azarbaijan’s capital city of Tabriz Wednesday morning on a day-long visit, is to open several industrial, health and development projects.

It is the fifth visit to East Azarbaijan province of President Rouhani over the past four years.