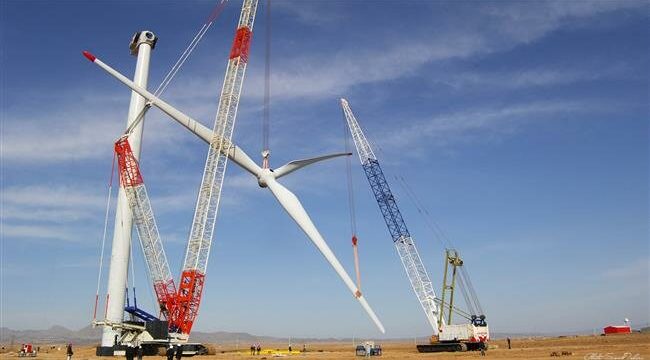 Press TV – Iranian President Hassan Rouhani has opened one of the country’s largest onshore wind farms in a region northwest of the country.

The Aqkand Wind Farm, located around 200 kilometers from Tabriz, the capital of East Azerbaijan province, came on line on Wednesday after Rouhani ordered its opening via video conference.

The €57mn project, which involves 20 huge turbines, can reach 40 percent of its capacity of 50 megawatts (MW) to generate 175 gigawatt hours of electricity a year. That would be enough to power 104,000 homes in Minaeh, a major city in East Azerbaijan, and its surrounding regions.

The two-year development, construction and operation of the wind farm were led by The Mapna Group, Iran’s largest energy engineering and construction company which is known for manufacturing giant high-quality turbines.

About 200 staff will look after the operations and maintenance of the wind farm over its 20-year lifespan.

The IRNA news agency said 100 more jobs will be created on the wider chain of the electricity industry in the region.

A local official hailed the opening of the wind farm as a major success in Iran’s move toward better use of renewable energy sources.

Afshin Milani said the electricity generated through the farm would have needed 50 million liters of diesel and 125,000 cubic meters of water a year if it was to come from conventional power plants.

The official said the farm also helps prevent the release of 125,000 tons of carbon dioxide each year.

Iran has made great strides over the past years to develop its renewable electricity sector.

The country currently operates more than 850 MW in renewables capacity, mostly in the form of wind and solar power plants.

Iran’s largest wind farm, with a capacity of 61.4 MW, is located to the west of the capital Tehran in the province of Qazvin.