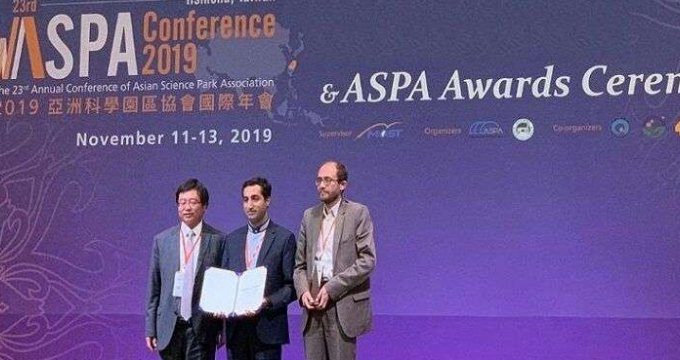 Financial Tribune – An Iranian knowledge-based company, based in Isfahan Province, has won the Certificate of Excellence in the award ceremony of the 23rd Conference of Asian Science Park Association held on Nov. 11-13 in Hsinchu, Taiwan.

Mozhgan Yazdianpour, the head of international affairs at Isfahan Science and Technology Town and director of the award-winning firm, told IRIB News that Behin Ab Zendeh Rood Company (shortened as BehinAb Co.) won the Certificate of Excellence in competition with 27 other competitors from all over the world.

“Technology level, development model, education level of employees, export rate, environmental impact, society and economy, amount of revenue and development plan for future were the criteria for the award,” she said.

BehinAb Company is a designer and producer of water and wastewater disinfectant systems and environmental monitoring, which has promoted exports to the UAE, Spain and Germany since its inception in 2002.

The 23rd ASPA Conference was themed, Prospects and Challenges of Science Parks in Digital Era. Innovative organizations such as science and technology parks, research parks, business incubation centers, universities, academic institutions and venture companies in the Asian region, as well as ASPA members participated in the conference.

During the two-day event, officials and experts delivered speeches on various tech fields, including linking up science parks to the global innovation ecosystem, transportation in emerging economies, future of science parks, transformation of governance in the digital era, sustainability, clean energy, startups and entrepreneurship.

Since its launch in 2001, Isfahan Science and Technology Town has been extending support and consultancy to knowledge-based and tech companies. The town has grown to a comprehensive tech center and houses over 500 companies with a workforce of over 7,000 university graduates and tech lovers.

In an effort to further expand facilities and working space for the fledgling startups and knowledge-based companies, Vice President for Science and Technology Sorena Sattari inaugurated several new innovation centers in Mazandaran Province during his daylong trip on Saturday.

The new centers include two innovation buildings and a workshop located in the Islamic Azad University of Mazandaran. The centers provide working space and facilities for the firms and startups based there to work on their ideas and design and produce technological items.

Sattari said the vice presidential office will unconditionally support the innovation ecosystem and entrepreneurship in the province.

“Officials should prepare the appropriate ground for the consolidation and growth of the emerging tech units and remove impediments in their way,” he added.

Later the same day, Sattari inaugurated another innovation building that is planned to operate under the management of Mazandaran Tech Park. The building has the capacity to house 17 knowledge-based firms.

With nine active innovation and technology centers, Mazandaran is home to over 200 knowledge-based firms.

Extending support to new startups and technology firms has been on the government’s agenda since 2013 when President Hassan Rouhani began his first term in office.Over the past few years, numerous tech parks have been established throughout the country.

Currently, there are seven tech parks in Tehran Province, most of which are backed by major Iranian universities, including Tarbiat Modarres University, University of Tehran, Sharif University of Technology, Iran University of Medical Sciences, Shahid Beheshti University and Islamic Azad University.

These tech parks carry the name of universities backing them.

For instance, Pardis Technology Park in eastern Tehran also has strong ties with the academia.

Housing about 3,500 people active in 1,000 firms and startups, Pardis Tech Park is one of the most outstanding innovation centers in the capital.

According to Akbar Qanbarpour, a deputy head of the park, talented teams in the center have developed over 1,000 innovative items using modern technologies since a decade ago.

“In the fiscal 2016-17, the total revenue earned from the import of technology products reached €150 million,” he said.

Tehran is not alone in its push for establishing innovation factories and tech parks. Many such centers have also been launched across Iran.

Innovation factories are to be launched in Iranian metropolises by the Vice Presidential Office to expand the startup and knowledge-based ecosystems.

Esmaeil Qaderifar, an official with the office, told reporters in late September that innovation factory projects in the provinces of Khorasan Razavi and East Azarbaijan are almost complete and will come on stream in the coming months.

“Tabriz in East Azarbaijan will get its third innovation factory when a construction project is completed,” Qaderifar said at the time.

Another tech project in Mashhad, the provincial center of Khorasan Razavi, is set to become operational in the near future.

The new projects resemble innovation factories in Tehran, such as Azadi and Highway, which have attracted and accommodated numerous tech teams and startups.

“Provincial projects have also been established in abandoned factories to keep the projects cost-efficient,” he said.

The Roads and Urban Development Ministry, municipalities and governorates in the host cities are assisting the vice presidential office in implementing these projects.

Also in Markazi Province, an innovation factory was inaugurated in Machine Sazi Arak Company in August.

The factory aims to support businesses by providing them with various resources, facilitating the activities of enterprises and accelerating their growth.

In the southern province of Sistan-Baluchestan, four new sections were inaugurated and added to the park’s active sections in October, as per a move to expand the science and technology park in the area.

Since its inauguration in 2012 in Zahedan, the provincial center of Sistan-Baluchestan, the park has been attracting and supporting tech units in the fields of new energies, mines and mineral products, agriculture and aquaculture.