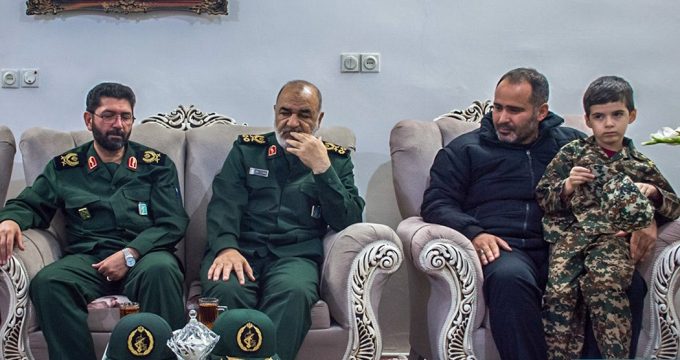 MNA – Chief Commander of Islamic Revolutionary Guards Corps (IRGC) Major General Hossein Salami paid a visit to the family of ‘security martyr’ Morteza Ebrahimi, who was killed during the recent unrest in Iran, in Shahriar, Tehran province on Sunday.

General Salami, in this meeting, hailed the role of the Iranian nation in foiling the plots of the enemies.

IRGC, in a statement on November 18, announced that it will give a harsh response to any unrest stirred up in the country that would threaten the security of the Iranian nation.

In its statement, IRGC expressed gratitude for the awareness of the Iranian nation against those who aim to take advantage of peaceful demonstrations of Iranians against the implementation of the recently approved fuel scheme.

Based on a decision made by the Judiciary, Legislative and Administrative branches, the government implemented a new gasoline rationing and price revision plan on Friday. Following the decision, a number of Iranian cities saw sporadic protesters that turned violent in some cases.

Today, the Iranian Law Enforcement forces said that in cooperation with other security apparatuses and the cooperation of vigilant people as many as 180 major elements behind the recent riots in the country have been arrested so far.