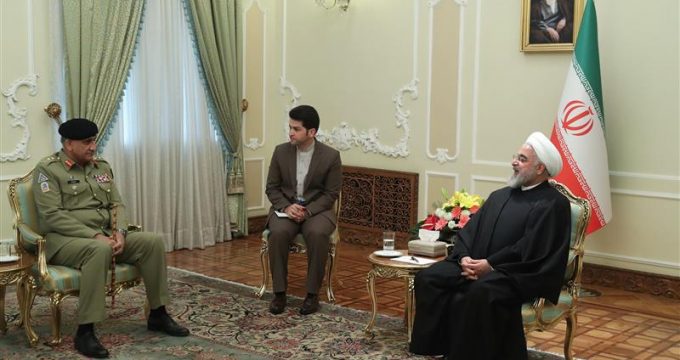 Tasnim – Iranian President Hassan Rouhani highlighted the importance of the country’s security ties with neighboring Pakistan and said Tehran and Islamabad can easily defeat terrorists in the region.

In a meeting with Chief of Army Staff of the Pakistan General Qamar Javed Bajwa in Tehran on Tuesday, Rouhani hailed the cordial relations between the two Muslim nations of Iran and Pakistan as “an invaluable asset” which should be used to further boost mutual cooperation.

“Given the resolve that exists in Iran and Pakistan, we can easily defeat the terrorists,” Rouhani further said.

“Iran welcomes the efforts of its neighbors to resolve regional countries’ problems,” he said, adding, “We believe that the US military presence has doubled the problems of Afghanistan.”

The Pakistani top general, for his part, praised the brotherly relations between Tehran and Islamabad and said that no country can undermine the ties.

The visiting Pakistani general, who arrived in Tehran on Monday, has held meetings with other Iranian officials, including Chief of Staff of the Iranian Armed Forces Major General Mohammad Hossein Baqeri and Army Commander Major General Abdolrahim Mousavi.

In April, Rouhani and Prime Minister of Pakistan Imran Khan agreed to set up a joint rapid reaction unit along the common border to combat terrorism.