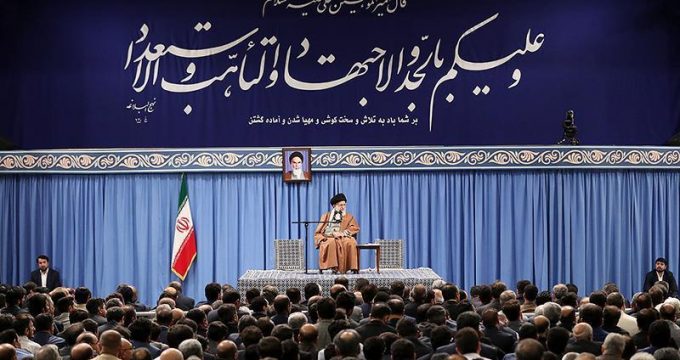 Press TV – Leader of the Islamic Revolution Ayatollah Seyyed Ali Khamenei says Iran has successfully pushed back its enemies in the military, political, and security warfare being waged against the nation.

Ayatollah Khamenei made the remarks in Tehran on Tuesday, meeting with a gathering comprising people active in the areas of production and economy as well as some entrepreneurs.

“Both [our] friends and [our] enemies should know that we pushed the enemy back in the arenas of military, political, and security warfare,” Ayatollah Khamenei said.

The Leader hailed Iran’s effective confrontation with enemy plots aimed at sowing unrest across the country under the guise of protest against fuel price hikes.

“The very actions taken over the several [recent] days had a security nature, they were not popular [in nature],” Ayatollah Khamenei stated.

On Friday, Iran began rationing gasoline and substantially increased the price of fuel, saying the revenue would be used to assist the needy.

The National Iranian Oil Products Distribution Company (NIOPDC) said in a statement late Thursday that the price of a liter of regular gasoline had gone up to 15,000 rials (12.7 US cents) from 10,000 rials and the monthly ration for each private automobile was set at 60 liters per month. Additional purchases would cost 30,000 rials per liter.

The decision sparked rallies in a number of Iranian cities, some of which were marred by violence as opportunist elements tried to exploit the situation and ride the wave of peaceful protests against hiking fuel prices. Consequently, the demonstrations turned violent in some cities, with reports of clashes between security forces and certain elements vandalizing public property.

Elsewhere in his remarks on Tuesday, Ayatollah Khamenei said Iran needs to grow immune to the impact of sanctions by developing an economy dependent on domestic production.

“We have forced the enemy back in various fields, and, by God’s grace, we will decisively force it back on the arena of economic warfare too,” the Leader noted.

Ayatollah Khamenei underlined that the US economic war against the Islamic Republic is not confined to its current president, saying it would be a mistake to think that sanctions would end when Donald Trump leaves office.

“By the grace of God, we will turn all sanctions into opportunities through the utilization of all unique capacities, only a portion of which have so far been put to use, and also through ventures by economic activists,” the Leader added.

The United States has imposed a raft of economic sanctions on Iran since it withdrew from a major international agreement on Tehran’s nuclear activity last year.

The European signatories — Britain, Germany and France — have so far failed to uphold their commitments. They have expressed vocal support for the deal, but failed to provide meaningful economic incentives as required under the nuclear agreement.