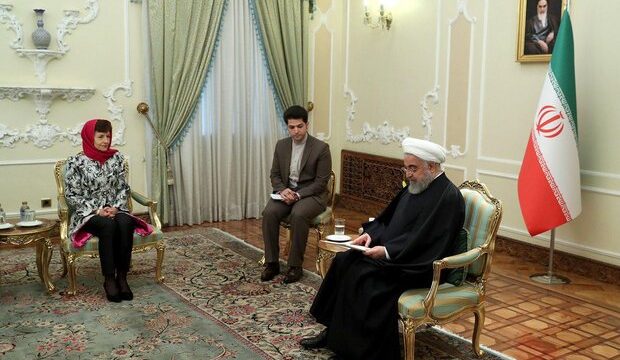 MNA – In a Tuesday meeting with Australia’s new envoy to Iran Lyndall Sachs, Iranian President Hassan Rouhani named US unilateral sanctions against Iran a political and economic mistake and a move in contrast to international regulations and resolutions.

In this meeting, where Rouhani received Sachs’ credentials, the Iranian president expressed tendency for development of mutual economic ties with Australia.

“We should pay a specific attention to our bilateral ties in the long-run,” he said.

“This is unprecedented in the history of the world, when the US seeks to punish the countries which are signatories of the UN Resolution,” Rouhani said, urging independent countries to encounter US measures.

He underlined that it is vital to make the US understand that it is not the world leader but a country among the world’s other countries.

“The Islamic Republic is committed to its JCPOA obligations despite the US unilateral withdrawal from the nuclear deal and Europeans’ unwillingness or incapability of making their made promises,” Rouhani noted.

“The dissolution of JCPOA will hurt the world,” he warned.

“The Islamic Republic is also committed to ensure the security of international waterways, in particular, in Oman Sea and the Persian Gulf,” Rouhani said, “Iran has recently submitted its initiative in this regard, under the title the Hormuz Peace Endeavor (HOPE), to the UN and is in talks with other countries about it.”

Ambassador Sachs, for her part, said “we do believe that improvement of Tehran-Canberra economic and trade relations will pave the way for development of cooperation in other areas as well.”

She stressed that Australia supports the preservation of the JCPOA, adding that “the nuclear deal is an instrument to provide security and peace in the region.”

“We believe that all the parties should remain committed to the deal to build confidence in the world,” she added.