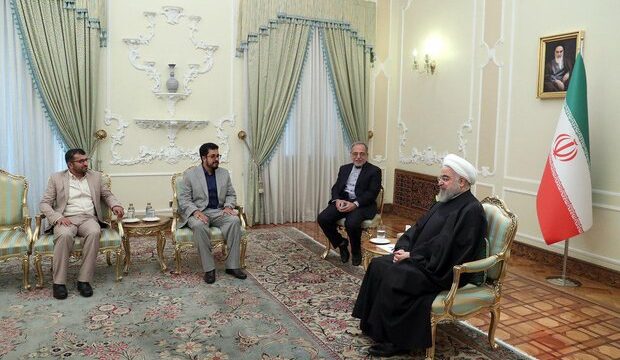 President Rouhani: Iran to back Yemeni people both in talks and in confronting aggression

“Iran, according to its religious duties, will stand beside the Yemeni people both in the countering aggressors and in negotiations,” Rouhani said on Tuesday while receiving credentials of New Yemen Ambassador to Tehran Ibrahim Mohammad Mohammad al-Deilami.

He admired the resistance of the Yemeni nation against aggressors, noting, “the Islamic Republic of Iran supports the Yemeni people with all its might along their way to establish peace and stability in the country and proceeding Yemeni-Yemeni talks.”

“Today, enemies and aggressors and all the world have come to this conclusion that they cannot achieve their aims by imposing pressure and war; and this means that resistance of Yemeni people has borne fruit,” said Rouhani.

“There is no doubt that the resistant Yemeni people will be the ultimate victor against aggressors,” he highlighted.

For his part, al-Deilami said that Yemen is seeking to further boost bilateral ties with Iran in different fields.

He noted that the Yemeni nation will never forget the Islamic Republic’s support for their revolution.

“The Yemeni people will always stand beside the Islamic Republic of Iran in the fight against the arrogance and will always support Iran’s valuable stances in preserving regional stability and security, especially the Hope initiative [Hormuz Peace Endeavor],” said the ambassador.

The ambassador had presented a copy of his credentials to Foreign Minister Zarif in early September.