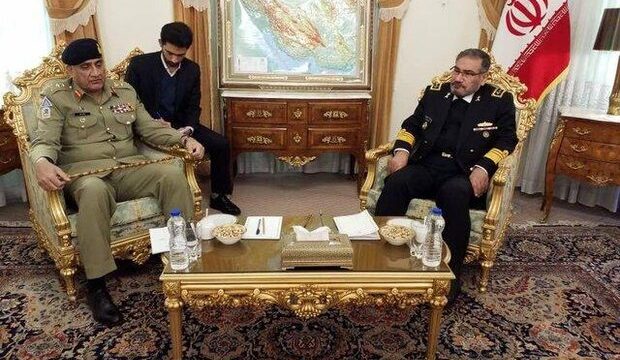 MNA – In a Tuesday meeting with the Pakistani General Army Officer General Qamar Javed Bajwa, the Secretary of the Supreme National Security Council Ali Shamkhani reiterated that Iran is focused on increasing its relations with regional countries, in particular, its neighbors.

Underlining the significance of Pakistan for Iran as a neighbor, Shamkhani called for expansion of defense, security, and economic ties between Tehran and Islamabad in a bid to provide regional security.

He also urged Islamic countries to increase pressure on Saudi Arabia to prevent it from sowing insecurity and violating human rights in Yemen.

The Pakistani General also expressed readiness for development of mutual ties between Iran and Pakistan, saying “Pakistan’s Army is determined to ensure security of joint borders by constant monitoring of the borders.”

Referring to the interference of trans-regional powers in regional issues, the Pakistani general called for confronting such undermining measures.

The Pakistan General also held talks with Commander of Iran’s Army Major General Abdolrahim Mousavi on Monday, where he welcomed bilateral relations with Iran saying that his force is ready to boost cooperation with the Iranian Army in various fields.

Heading a high-ranking military and security delegation, the Pakistani Army commander arrived in Tehran on Monday. He is also slated to hold a meeting with Foreign Minister Zarif.