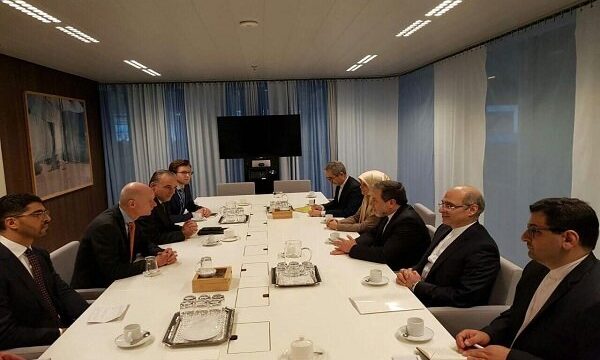 Deputy FM Araghchi: ‘If Europe wants to preserve JCPOA, it should be ready to pay its price’

MNA – If Europe wants to preserve the Joint Comprehensive Plan of Action (JCPOA), it should be ready to pay the price for it, said Iranian Deputy Foreign Minister Abbas Araghchi in his meeting with Dutch Foreign Minister Stef Blok.

Araghchi, who is in the Netherlands to attend the 3rd round of political talks between the two sides, held talks with Dutch Foreign Minister Stef Blok on the international issues, especially the latest developments regarding the Iran nuclear deal (JCPOA), as well as the ways to expand relations between the two countries.

Pointing to Iran’s reduction of its JCPOA-commitments, he said that the move comes within the framework of Iran’s rights under the nuclear agreement and will continue until Iran’s interests are met.

Dutch foreign minister, for his part, reaffirmed the need to preserve the JCPOA, saying that the Netherlands supports the French initiative to find a way out of the current crisis.

Iran’s deputy foreign minister also met and held talks with his Dutch counterpart Andre Haspels on various bilateral, multilateral and regional issues, including the JCPOA, the Hormuz Peace Endeavor (HOPE) initiative, maritime security in the Persian Gulf and the Red Sea, as well as the regional developments and bilateral economic cooperation.

While criticizing the EU’s failure to fulfill its commitments regarding JCPOA and explaining Iran’s four steps of reducing JCPOA commitments, Araghchi stressed that EU should be ready to pay the price if it wants to maintain the agreement.

He also highlighted that Iran’s right to suspend all or part of its JCPOA commitments has been recognized and that what Iran has done so far is not a violation of the agreement.

Referring to the HOPE initiative proposed by Iranian President Rouhani to the UN, he said that peace and security in the Persian Gulf region should be provided by regional countries themselves, and the HOPE initiative is suggested for this purpose, adding that there is no need for any coalitions that would only increase tensions in the region.

Regarding the capacities in the economic relations of the two countries, Araghchi noted that the Dutch government is expected to facilitate the conditions of business and trade between Dutch and Iranian companies and provide the necessary assurances to its country’s businesses.

Andre Haspels, meanwhile, emphasized Iran’s role in securing regional peace and stability, saying that the Netherlands is seeking to reduce tensions in the region.

Iranian Deputy Foreign Minister also delivered a speech in the Netherlands Institute of International Relations Clingendael regarding the JCPOA and the EU’s strategy to preserve it.