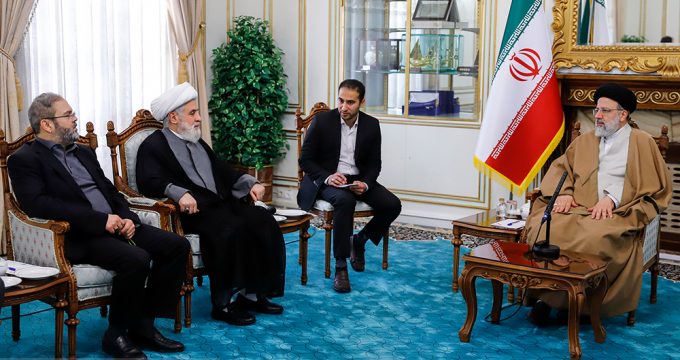 Tehran Times – Judiciary Chief Hojjatoleslam Ebrahim Raeisi said on Sunday that atmosphere in Iran is to resist the economic war launched against the country and also fight against corruption.

The top judge made the remarks during a meeting with Hezbollah Deputy Secretary General Sheikh Naim Qassem in Tehran.

He also said that fighting corruption in Lebanon was upon the people’s request and will help stabilize the country.

Elsewhere, he said that animosities against the regional people have become more complicated and therefore more vigilance is required to counter them.

For his part, Sheikh Naim Qassem said Iran’s fight against corruption should be a model for other countries.

In a meeting of the Supreme Council of the Judiciary in October, Raeisi said that the economic system should be transparent in order to prevent corruption.

“The main strategy to prevent corruption is making the country’s economic system transparent and institutionalizing transparency,” he said.

Raisi’s Judiciary has in recent months launched a fresh attempt to combat corruption, which has so far seen the arrest of many individuals, including some judges.

The top judge’s anti-corruption campaign has been lauded by lawmakers, a hundred of whom released a statement last month to thank him for his efforts.

Hegemonic system seeks to cause new crises in the region: Shamkhani

In a separate meeting with Sheikh Naim Qassem, Ali Shamkhani, secretary of Iran’s Supreme National Security Council (SNSC), said that the hegemonic system seeks to cause new crises in region.

“After collapse of Daesh, as the element of the United States and the Zionist regime of Israel in the region, the hegemonic system seeks to cause new crises in the region,” Shamkhani said.

The top security official added, “Strategy of causing chaos in Lebanon was in line with making up for failures in other (resistance) fronts, however, it was defeated by the Lebanese people’s vigilance.”

He also noted that the “child killer” regime of Israel is the chief root of chaos and crises in the region.

For his part, the Hezbollah deputy leader said that Lebanon will not let Israel achieve its objectives in the region.