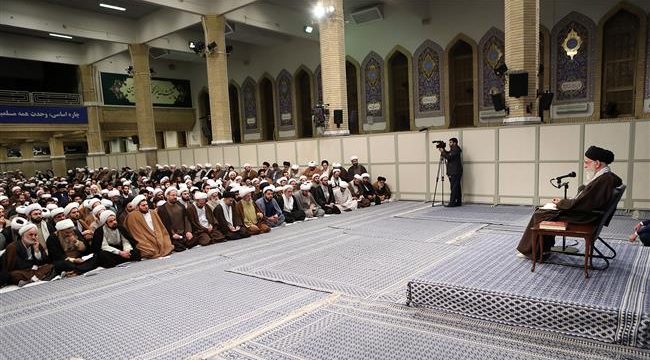 Khamenei.ir – The statements of the Leader of the Revolution concerning the events following the implementation of the Fuel Consumption Management Program

All praise is due to Allah, the Lord of the Worlds; and peace and greetings be upon our Master Muhammad, and upon his Immaculate Household; and may God curse all their enemies.

Before we start our discussion, I would like to mention that during the last couple of days, events have followed the enactment of a resolution by the Heads of the three branches of power. Unfortunately, yesterday and over the last two nights, in some cities of the country, some problems were created, several people were killed, and some places were damaged. Such events took place in the last two days.

A few points should be considered in this regard. First, when something is enacted by the country’s Heads, one should be optimistic about it. I am not an expert in this area; I mean it is not my specialty. I have told this to the officials, too. I have said that the experts have varying opinions on this matter of gasoline (prices), some of them regarding it to be necessary, and others believing it to be detrimental. Therefore, I am not an expert in this field. I have said that I am not an expert (in this field), so if the Heads of the three branches of power make a decision, I will support them. I said this, and I will support them. The Heads of the country, backed by expert advice, have come to a decision for the country, and this decision should be enforced. This was the first point.

The second point is that some people of course become worried or unhappy about this decision. It is to their disadvantage, or they think it is to their disadvantage. Either way, they become dissatisfied. However, burning down a bank is not an act of the people; it is an act of rebels. This should be considered. Usually in such situations, rebellious, malicious, disreputable people enter the scene. Sometimes, some young people go along with them in the excitement and cause this sedition.

This sedition won’t solve any problems. It only adds the problem of insecurity to the previous problems. Insecurity is the most important affliction for any country and for any society. This is their goal. Look and see how during the past two days – one day and two nights – these events have been taking place and all of the centers of villainy around the world that oppose us have encouraged these measures. This includes from the sinister, evil Pahlavi family to the evil, criminal group of the hypocrites (MEK). They are repeatedly encouraging and inciting the people, via social media and other means, for this wrongdoing to take place. The point I want to make is that no one should help these insurgents. No wise and decent person who loves his country and his comfortable life should help them. They are insurgents. These actions are not done by the common people.

The officials should also be cautious and careful, and they should do whatever is possible to minimize these troubles.

On television yesterday, I saw some of the honorable officials saying they won’t let the prices of goods rise as a result of the increase in the price of gasoline. This is important, because prices are already high now. If they rise further, this inflation will cause many problems for the people. The officials should be careful about this.

They should take appropriate measures (to prevent more inflation). Also, the officials responsible for the country’s security should perform their duty. Fortunately, our dear people have shown their insight and awareness during various events in this country. The people should realize where these bitter events stem from. They should realize who is responsible for the burning, breaking, sabotage, fights, and insecurity. The people should understand this and be aware, and they do understand and are aware. Therefore, the people should separate themselves from them (the insurgents). This is my advice. The officials of the country should conscientiously perform their duties.