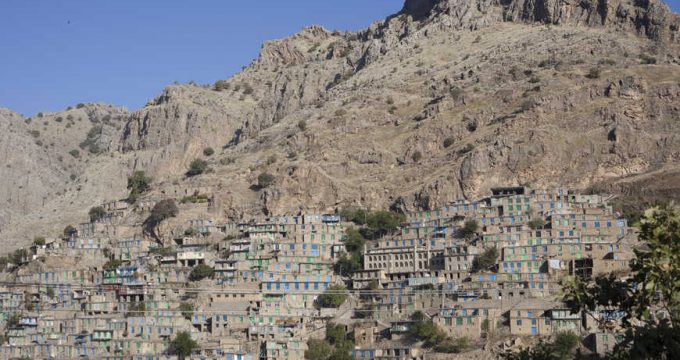 Al-Monitor | Sarbas Nazari: Located in Iran’s Kurdistan province, 10 kilometers (6 miles) from the Iraqi border, Hawraman is an ancient village with an unfathomable uniqueness. Houses have been built on rugged mountains, where a family’s rooftop serves as the upper neighbor’s yard, making the entire village resemble a gigantic stairway from afar. Sitting right across from the village is a massive garden that has much in common with the Hanging Gardens of Babylon.

Lifestyle in Hawraman has dodged the waves of 21st-century technology that continue to hit communities across the world. The architecture is characterized by walls erected with stones that are not transferred to the site but extracted from the very mountain they are built upon. What makes the construction style exceptional is “weshka kalak” or the “dry walls,” to which cement is a stranger.

Hawraman is also home to the ancient Pir-Shalyar wedding festival, an intricate set of rituals performed amid the characteristic harsh snowy days and nights. Starting on the 40th day of winter, the festival’s different stages take place over three days during three consecutive weeks after the 15th of Rebandan (early February). Rebandan is a month in the Kurdish calendar that signifies a period when roads are typically blocked due to relentless snowing.