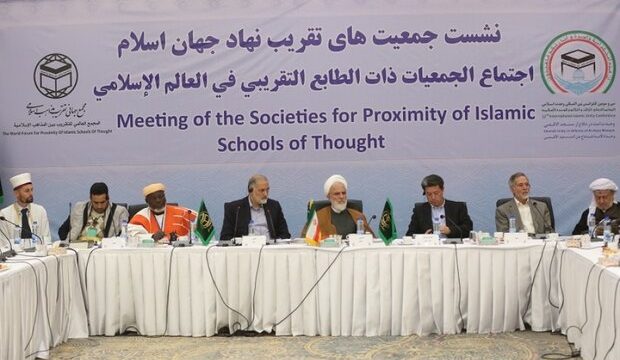 MNA – Participants at the 33rd Islamic Unity Conference hosted by Tehran strongly condemned in their final statement the aggression against al-Aqsa Mosque carried out within the framework of the so-called ‘Deal of the Century’.

The 33rd Islamic Unity Conference under the title of “Ummah Unity in Defense of al-Aqsa Mosque” wrapped up with the final statement on Saturday, stressing support for the holy Mosque.

The participants called on freedom-seeking figures across the globe to voice their solidarity with the Resistance and maintaining the honor of Muslims against the Israeli regime and the US.

Al-Aqsa Mosque is especially sacred in the eyes of all Muslims because it used to be their first Qibla (praying direction). In the final statement, the participants demanded probe into all crimes committed against al-Aqsa Mosque and call for serious measures to be taken against such atrocities, according to Taghrib News Agency.

It is 50 years since the arson attack on al-Aqsa Mosque by the Israeli regime, a move which sparked the Muslims’ wrath and establishment of the Organization of Islamic Cooperation (OIC). The Organization is however incapable of defending the rights of Muslims and settling the issues in Palestine, Yemen, Syria, Bahrain, Myanmar and other Islamic countries, the statement said, calling for increasing efforts and cooperation among Muslims for proposing new solutions and immeidate measures to defend the holy mosque and the Islamic Resistance.

Participants also reiterated that the Israeli regime is not only a threat for Palestine but also for all Islamic countries and a manifestation of that is the efforts to establish a regional coalition as a joint effort of the Zionist regime and the United States.

Al-Aqsa Mosque is the axis of unity across the world of Islam as Muslim nations unanimously agree on that; although attempts by some backward countries and their puppets for normalization of ties with the Zionist regime, as well as the crackdown of the defendants of the holy mosque are considered as an unforgettable betrayal against the Muslim nation, the statement added.

Participants honored the resistance of Palestinian nation against state-terrorism of the Israeli regime and voiced their solidarity with march of return and slamed violence and crackdown of the Palestinian protesters.

Constant aggression against al-Aqsa Mosque within the framework of the so-called Deal of Century and Judaization of al-Quds counts to dangerous treachery against Islamic sanctities, according to the statement.

They also denounced the US illegal measures of economic sanctions against Iran, and Washington’s support of the terrorist groups.

The 33rd Islamic Unity Conference wrapped up on November 16, 2019 in the Iranian capital of Tehran. Over 350 guests from various countries and 250 participants from Iran attended the annual event held by World Forum for Proximity of Islamic Schools of Thought.