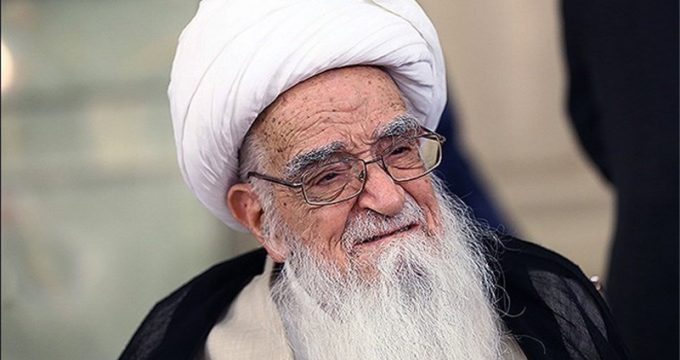 Radio Farda – Grand Ayatollah Safi Golpayegani has called on the Iranian Parliament (Majles) on Saturday, November 16 to revoke the decision to increase the price of gasoline as massive protest demonstrations are raging in the streets of major Iranian cities.

Golpaygani who is over 100-years old is one of the most senior and authoritative clerics in Iran.

This comes while the Majles was apparently not involved in the decision making and the price rise was approved unconstitutionally based on the decision of the heads of the three branches of the government, who form a special committee to deal with Iran’s current economic crisis.

The three-fold rise in the price of gasoline Friday morning has given rise to widespread protests that started on Friday and continued on Saturday.

Another ayatollah, Alavi Gorgani has called on the government to revoke the decision to raise fuel prices, “before it is too late”.

Meanwhile, the Khamenei-appointed conservative Expediency Council appears to have been shocked by the sight of the demonstrations as it has announced that it was not involved in decision making on increasing the price of gasoline.

Judiciary chief Ebrahim Raeesi was also quoted as having said that he voted against the price rise at the meeting of the heads of the three government bodies, but his statement was later refuted possibly because the regime wanted to show that it was speaking with one voice.

The Expediency Council’s disavowal of the decision and Raeesi’s initial announcement that he was opposed could be signs that conservatives try to distance themselves from a move that risks mass unrest and revolt by the people.