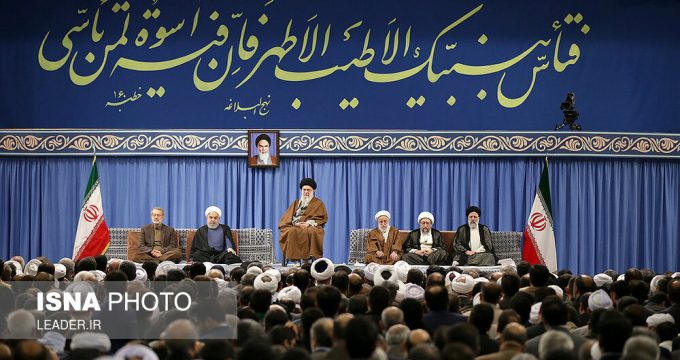 Iran to keep helping Palestinians against Israel with no reservation: Ayatollah Khamenei

Press TV – Leader of Iran’s Islamic Revolution Ayatollah Seyyed Ali Khamenei says Tehran will keep helping the Palestinians with no reservation, and calls on other Muslim countries to follow suit.

Speaking in a Friday meeting with the ambassadors of Muslim countries and participants of the 33rd Islamic Unity Conference in Tehran, Ayatollah Khamenei said Iran’s stance on the issue of Palestine is a principled and definitive one.

“Since the beginning of the Islamic Revolution to this day, we have remained in this position – meaning we have helped and will continue to help Palestine and the Palestinians without any consideration and we view this the duty of the whole Islamic world,” the Leader said.

Ayatollah Khamenei touched on the enemies’ efforts to “distort” pronouncements by the late Father of the Islamic Revolution Imam Khomeini and Iranian officials about the elimination of Israel.

“We are in favor of Palestine and its independence and salvation, but the elimination of Israel does not mean the elimination of the Jewish people, because we have nothing to do with them, as a number of Jews live safely in our country.

“The elimination of Israel means the elimination of the fake Zionist regime and that the Palestinian people, be they Muslim, Christian or Jewish who are the main owners of that land, should be able to choose their government,” the Leader said.

They should also be able to “kick out outsiders and thugs like [Israeli Prime Minister Benjamin] Netanyahu and run their country, which of course will happen,” Ayatollah Khamenei added.

Ayatollah Khamenei described the issue of Palestine as the biggest plight of the Muslim world which has displaced a nation from its home, and underlined the significance of unity among Muslim nations in resolving the issue.

“Had Muslim countries maintained even the minimum levels of unity, we would not have so many plights in the Muslim world today,” the Leader said.

Israel, US hostile to all Muslim states

Elsewhere in his remarks, the Leader said the US, Israel, and enemies of Muslim unity are hostile to all Islamic countries.

“The nature of Islam is based on the rejection of tyranny, arrogance and hegemony; therefore, they are opposed to Islam and all Muslim states in principle,” he said, rejecting the notion that they are only hostile to Iran.

The Leader pointed to insulting remarks by US leaders about the Saudis, saying Washington has shown its clear hostility toward Saudi Arabia and its nation by expressing its intention to loot the kingdom.

“When they are explicitly saying that the Saudis have nothing but money they mean ‘we must go and rob them’. This is open hostility with a country and nation and their opposite sides must understand what their duty is against such insults in view of their Arab zeal and Islamic dignity.”

Ayatollah Khamnei further cited the US presence in the region as a source of trouble, corruption, insecurity, and the formation of such groups as Daesh, and stressed the need for Muslim nations to get familiar with Washington’s “true and hypocritical face”.

The Leader warned that the US’ main weapon today is infiltrating sensitive centers, creating division among nations, creating mistrust among governments and people, and implying that giving in to Washington is the only way to resolve their problems.

“This weapon is even more dangerous than military and hard weapons,” he warned, stating that the way to confront the enemies is to obey God’s command of resisting on the path of righteousness.

“Of course, this resistance will have hardships, but enduring these hardships is a righteous act and will be rewarded by God. Moreover, giving in to the enemy will have more hardships, and God will punish those who give in to oppression.”

The Leader further stressed the need for Muslim communities, governments, ethnic groups, and sects to avoid harming each other, urging them to remain united against their common enemy.

“At higher levels, Islamic countries must join hands in science, wealth, security, and political power and strive to achieve a modern Islamic civilization,” he said, adding the Islamic Republic of Iran considers this as its ultimate goal.

Ayatollah Khamenei said, “Peaceful nuclear energy is needed by nations, but Western monopolists seek to control this energy and give it to other nations drop by drop in exchange for their dignity and independence.”

In the case of Iran, “Westerners know that fundamentally and ideologically, we do not seek nuclear weapons. So, their opposition to the Islamic Republic’s nuclear drive aims to deter Iran from acquiring nuclear knowledge, industry and capability,” he added.

The Leader’s meeting with the guests of the Islamic Unity Conference was held on the auspicious occasion of the birth anniversary of Prophet Muhammad (PBUH) and his great grandson Imam Sadiq, the sixth Imam of Shia Muslims.

The 33rd edition of the International Islamic Unity Conference was inaugurated by President Hassan Rouhani on Thursday.

Organized by the Iranian-based World Forum for Proximity of Islamic Schools of Thought, the three-day event aims to establish unity and synergy among Muslims.

Addressing the opening ceremony, President Rouhani said the only profiteers of division among Muslims are the foreign actors in the region.

“Ummah Unity in Defense of al-Aqsa Mosque” is this year’s theme of the conference. This is the second consecutive year that Palestine has become the focus of the Unity Conference.