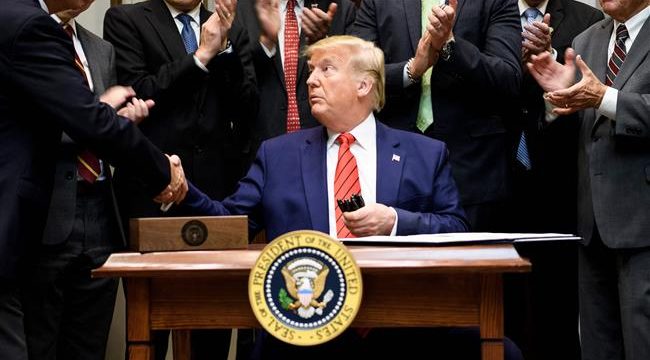 Trump extends 1979 national emergency regarding Iran for one more year

Press TV – US President Donald Trump has renewed the national emergency regarding Iran, which was put in place 40 years ago following the takeover of the American embassy in Tehran.

In a notice released on Wednesday, the White House announced that the emergency state declared in Executive Order 12170 of November 1979 with respect to Iran will remain in effect for another one year.

“On November 14, 1979, by Executive Order 12170, the President declared a national emergency with respect to Iran pursuant to the International Emergency Economic Powers Act (50 U.S.C. 1701-1706) and took related steps to deal with the unusual and extraordinary threat to the national security, foreign policy, and economy of the United States constituted by the situation in Iran,” read the notice signed by Trump.

“Our relations with Iran have not yet normalized, and the process of implementing the agreements with Iran, dated January 19, 1981, is ongoing.  For this reason, the national emergency declared on November 14, 1979, and the measures adopted on that date to deal with that emergency, must continue in effect beyond November 14, 2019,” it added.

A state of emergency gives a US president extraordinary powers, including the ability to seize property, summon the National Guard and hire and fire military officers at will.

The state of emergency also forms the basis for most US sanctions against other countries.

The Iran emergency act is the oldest running US emergency measure that has been renewed every year.

It was issued on November 14, 1979 by then president Jimmy Carter ten days after the American diplomatic mission’s takeover by a group of university students.

The students believed that the compound had turned into a center of espionage plotting to overthrow the nascent Islamic Republic, and held 52 American diplomats for 444 days.

Documents found at the political mission corroborated claims by the revolutionary students that Washington had been using the compound to hatch plots against Iran.

Under Trump, the US has adopted a “maximum pressure” campaign against the Islamic Republic and unleashed the “toughest ever” sanctions against the Iranian nation.

1979 national emergency, Donald Trump, Iran-US tensions, US hostility toward Iran November 13, 2019
US ‘wrong behavior’ root cause of crisis over Iran nuclear deal: China
UN calls on US to comply with rules, allow medicines into Iran