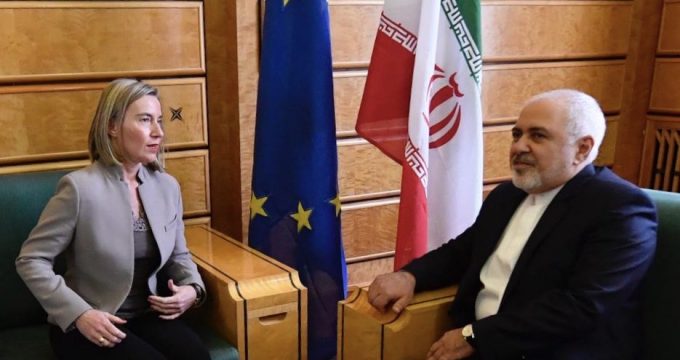 Atlantic Council | Barbara Slavin: Since the US unilaterally withdrew from the Iran nuclear deal in May 2018, Europe and Iran have been testing each other’s resolve to stay within the Joint Comprehensive Plan of Action (JCPOA). This has especially been the case since the Trump administration announced in May that it would seek to impose a total embargo on Iran’s oil exports.

Iran, which had remained compliant with the JCPOA for more than a year after the US quit, began taking steps to breach limits in the deal on numbers and types of centrifuges in operation, level of uranium enrichment, stockpiles of low-enriched uranium and finally on November 6, the venue for enrichment. The steps—which have stopped short of enriching above a 5 percent concentration of the isotope U-235 or kicking out international inspectors—have been largely reversible but still increasingly worrisome.

The decision last week to resume enrichment at Fordow, an underground facility that would be difficult to destroy in a military attack, was especially provocative and triggered a tough statement November 12 by the foreign ministers of Britain, France and Germany—the so-called E-3 which negotiated the JCPOA along with the US, Russia, China and Iran.

Expressing “extreme concern,” the ministers went on to threaten invocation of a “dispute resolution mechanism” in the deal that could lead to the snapback of both European Union and UN Security Council sanctions against Iran.

Iran, for its part, has made clear that if snapback occurs, it will formally withdraw from the JCPOA and possibly even its commitment to remain a non-nuclear weapons state under the 1970 nuclear Non-Proliferation Treaty. Iranian Deputy Foreign Minister Abbas Araghchi told a conference in Moscow that if the Iran file was “securitized” and the country was again subjected to UN nuclear-related sanctions, Tehran would have to revisit its “nuclear doctrine” which foreswears the development of nuclear weapons. (His superior, Foreign Minister Mohammad Javad Zarif made a similar threat last spring.)

Neither Europe nor Iran wants to see the destruction of the JCPOA, which represented for each the culmination of twelve years of hard diplomatic work, initially without US participation.

The exchange of threats can be seen as a kind of nuclear chicken. Neither Europe nor Iran wants to see the destruction of the JCPOA, which represented for each the culmination of twelve years of hard diplomatic work, initially without US participation. Both have been trying to shield the deal from the Trump administration’s efforts to destroy it and to preserve at least the skeleton of the 2015 agreement for a second Trump administration or a successor democratic administration to rejoin and fortify.

Iran, for its part, is trying to pressure the other parties to the deal to compensate it financially for the harsh impact of US secondary sanctions, which have thrown the Iranian economy into recession. Iranian officials complain that Europe, more than nine months after launching a so-called “special purpose vehicle” called INSTEX for Europe-Iran trade, has failed to operationalize this mechanism. They note the increasing unpopularity of the JCPOA among ordinary Iranians, whose expectations for economic growth have been dashed by US sanctions and the unwillingness of European companies to risk more lucrative US ties for business with Iran. Upcoming Iranian parliamentary elections in February 2020 are also a factor in Iranian calculations, with concerns mounting that hardline candidates will take control of the body from more pragmatic incumbents who have supported the nuclear deal and engagement with the West.

President Hassan Rouhani, for whom the JCPOA is his major accomplishment, has sent mixed signals about its fate. While his subordinates threaten to quit if UN sanctions are re-imposed, Rouhani has underlined some of the remaining benefits to Iran of staying within the deal. He noted recently, for example, that under the agreement a UN embargo on foreign arms sales to Iran and Iranian exports of arms expires in 2020. This could be a useful argument with the Islamic Revolutionary Guard Corps, which has been starved of advanced conventional weapons for decades, and with Iran’s military-industrial complex, which looks to sell advanced drones and other domestically produced equipment abroad.

While Iran and Europe face off over the JCPOA, the United States is largely but not entirely out of the picture.

Efforts by French President Emmanuel Macron to mediate between the Rouhani and Trump administrations are not entirely dead. Iranian officials have suggested to this author that work on the so-called Macron plan was more advanced than many observers assumed. The plan—which would provide $15 billion in credits to Iran to import European and other products in return for Iran returning to compliance with the JCPOA—foundered in September over the issue of sequencing, with Iran demanding sanctions relief from US President Donald Trump before halting or reversing nuclear steps. Trump wanted a meeting with Rouhani without announcing that relief upfront.

Iranians clearly do not trust Trump. But there is a school of thought in Tehran that it would be better to try to do a deal with a weak US incumbent than wait for a successor. Although Democratic candidates have said they would return to the JCPOA if it is still viable in 2021, Iranians understand that a new president will have many other priorities and would most likely initiate a lengthy policy review that takes into account the expiration of several JCPOA provisions as early as 2024. In addition, Iran will vote in May or June 2021 for a new president, undermining a lame duck Rouhani’s room for new negotiations.

Iran and the West are waging this war of nerves as Iran faces a somewhat more conducive regional environment for diplomacy. Both the United Arab Emirates and Saudi Arabia have been thoroughly spooked by recent attacks on their oil tankers and installations that have been blamed on Iran—and by a lack of a forceful US response.

The UAE has withdrawn most of its military from Yemen, released $700 million in frozen Iranian assets and even called for talks with Iran about both the nuclear issue and regional conflicts. Saudi Arabia has reached out to Yemen’s Houthi rebels for new peace talks and toned down its harsh anti-Iran rhetoric as it focuses on trying to market shares in its giant oil conglomerate, Aramco, and boost its anemic economic growth.

If two key US allies in the region tell Washington that they are amenable to diplomacy with Iran, it would be hard for the Trump administration to object, given Trump’s frequently expressed desire to withdraw US forces from the Middle East.  A benign US reaction assumes, however, that Iran’s nuclear steps remain calibrated and that Europe continues to play a deft diplomatic hand.

Barbara Slavin is director of the Future of Iran Initiative at the Atlantic Council.