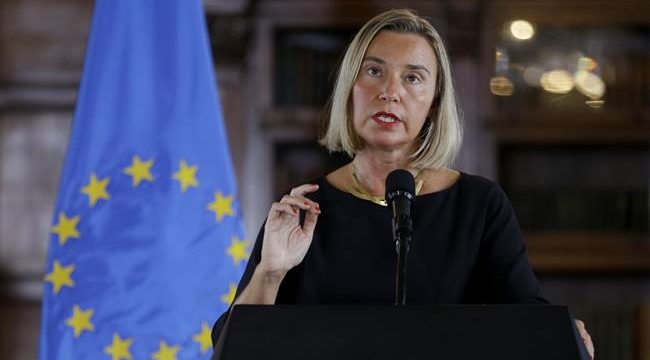 Press TV – European Union foreign policy chief Federica Mogherini says despite all difficulties, the bloc’s foreign ministers have once again reaffirmed their support for the full implementation of a nuclear deal Iran clinched with major world powers in 2015.

“Let me stress that there was again today, around our table, full commitment to the [nuclear] agreement (officially known as the Joint Comprehensive Plan of Action or JCPOA) that remains crucial for our security even if it is increasingly difficult to preserve it,” Mogherini told reporters after a meeting of EU foreign ministers in Brussels on Monday.

“We will continue efforts to have a full implementation of the agreement,” she added.

The EU foreign policy chief also expressed major concern over the latest announcement by Iran on its decision to resume uranium enrichment at its Fordow nuclear facility, saying the union always relies on the International Atomic Energy Agency (IAEA) for verification.

Mogherini noted that the IAEA inspectors were on the enrichment site in Iran in the recent days and added that the EU would react to the issue after the agency’s report.

“As the coordinator of the Joint Commission, I’m reaching out to all the JCPOA participants to discuss the follow-up and the next steps based again on the IAEA report that we will see later today,” she pointed out.

The Atomic Energy Organization of Iran (AEOI) said on Wednesday that it had officially started injecting gas into hundreds of centrifuges at Fordow in the fourth step away from the nuclear deal.

The step came as part of the fourth rollback of Iran’s commitments under the nuclear deal in reciprocation for the United States’ pullout from the JCPOA and Europe’s failure to meet its end of the bargain.

It involves injecting UF6 (uranium hexafluoride) gas into centrifuges under the supervision of inspectors from the IAEA.

Under the JCPOA, the first-generation IR-1 centrifuges at Fordow are only allowed to spin without uranium gas.

Head of the AEOI Ali Akbar Salehi said on Monday Iran has increased its daily production of low-enriched uranium (LEU) after it resumed enrichment at the Fordow facility.Speaking in an interview with the Associated Press, the Iranian nuclear chief added that the country was now producing at least 5.5 kilograms of low-enriched uranium per day, compared to previous production of about 450 grams per day.

The UN nuclear agency on Monday confirmed that Iran has begun enriching uranium at its Fordow nuclear facility, saying that Tehran’s enriched uranium stock has continued to grow.

“Since 9 November…, Iran has been conducting uranium enrichment at the plant,” the IAEA said in a quarterly confidential report, obtained by Reuters.

According to the report, Iran’s stock of enriched uranium has increased to 372.3 kg, well above the JCPOA’s 202.8 kg cap.

It added that the maximum fissile purity to which Iran has enriched uranium so far, however, remains 4.5 percent, above the deal’s 3.67 percent cap but still well below the 20 percent Iran had achieved before and the 90 percent required for making atomic bomb fuel.

The IAEA further noted that Iran has installed advanced centrifuges not mentioned in the nuclear deal, including IR-8b, IR-9, and IR-s.

Despite its decision to further scale back its nuclear commitments, Iran said Friday it has left the door open for negotiations over the fate of the nuclear deal.

“We had made it clear that if the measures of other parties do not yield results, we’d take the next steps to decrease our JCPOA commitments,” Iranian Foreign Minister Mohammad Javad Zarif told the Islamic Republic of Iran Broadcasting (IRIB).

“We will hold talks with those parties interested in preserving the JCPOA; the French will continue their consultations on the issue, and we will leave the door open for negotiation and understanding,” Zarif noted.