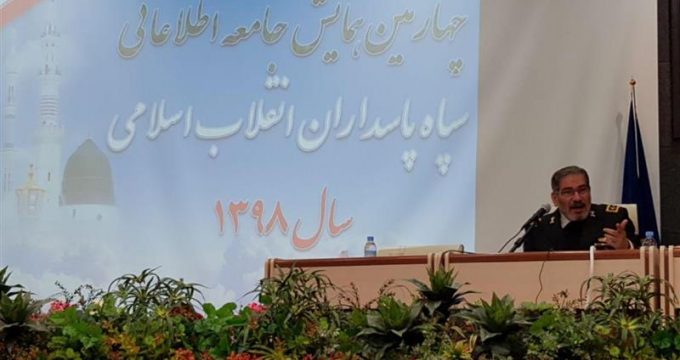 Addressing a conference of the IRGC’s intelligence forces held in Tehran on Tuesday, Shamkhani hailed the “invaluable” endeavors of the IRGC’s Intelligence Organization to uncover and thwart foreign conspiracies against Iran.

“The IRGC is an unchanging symbol of the (Islamic) Revolution and individuals’ closeness to or distance from… it is an important indicator of the extent of love for the revolution and its eternal values,” the security official added.

Shamkhani further highlighted the Islamic Republic’s achievements in defeating US strategies in East and West Asia to support the Zionist regime of Israel and establish a unipolar system in the world.

The Islamic Revolution’s power to mobilize its forces has defeated the US strategy to create and take advantage of the Daesh (ISIS or ISIL) terrorist group, which emerged with the aim of stopping the spread of the Islamic Awakening, he went on to say.

The remarks came against the backdrop of increased tensions between Iran and the US after the Islamic Republic shot down an advanced US spy drone over its territorial waters and also recent attacks by Yemeni forces on Saudi oil facilities, with Washington and Riyadh claiming Iran was behind them.

The Islamic Revolution Guards Corps said on June 20 that a US spy drone that violated the Iranian territorial airspace in the early hours of the day was shot down by the IRGC Aerospace Force’s air defense unit near the Kooh-e-Mobarak region in the southern province of Hormozgan.